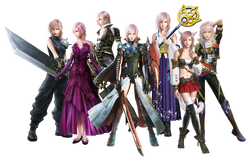 Garbs (ウェア, Wea?, lit. Wear) are costumes in Lightning Returns: Final Fantasy XIII and are an integral part of the Schema system. One feature allows players to change the garments' color via a color wheel in a customization menu. The garb the player has set as default is the one Lightning wears on the field (sans pre-rendered video scenes). Garbs also have certain locked abilities, auto-abilities, and stats; thus choosing a suitable garb can give the player a strategic advantage in battle.

When equipped with a garb from another Final Fantasy game, Lightning will be granted special sound effects, victory poses, and victory fanfares originating from the garb's respective game. Collecting thirty garbs earns the Expert Stylist achievement.

The following is listed according to the in-game "Category" setting.

Players can change colors of garb to their preferences. The parts that can be customized depend on the garb. The player can either select all parts of a garb at once, or individual parts, and choose a new color from the menu. Colors can also be customized and added to the garb.

Customizing a garb's color for the first time earns the Novice Artist achievement.

Player reaction to the downloadable costumes in Final Fantasy XIII-2 was mixed, as some players felt the effect should be more than cosmetic, but, for example, the Black and White Mage outfits were very well received. With the previous games in the trilogy there was always a request from the development team to be able to change the look of the characters when their paradigm roles switched, and with new system memory resources opening up with a single playable character, this became possible with Lightning Returns: Final Fantasy XIII. However, the concept of changing outfits didn't come first, but naturally found its way into the game based on the compatibility between how the game mechanics were set up.[1]

The developers wished to try and match the look of a garb with what proficiencies it would grant in battle, and strove for different looks for more offensive, defensive and magical-oriented garbs. For different garbs, the team only pitched for outfits they felt would definitely work, and thus there was little need to cut any of them out. Once getting down the last few, the decisions were made democratically as a team of what went in and what was left out.[2] As the player has only one playable character, it was decided she could change between jobs, and thus many garbs were built with the look and feel of traditional Final Fantasy jobs. Although players can freely assign abilities to go with different outfits, the distinctive look of the garbs was designed to give visual clues on what kind of "job" it could be made into.[2]

Yuji Abe has singled out Primavera as a "classic thief outfit" from the Final Fantasy series, based on a redesign and rearrangement of the outfit worn by Locke Cole in Final Fantasy VI, and said that there are numerous garbs in Lightning Returns: Final Fantasy XIII that are re-imaginations of his original outfit.[2]

Garbs based on Yuna's summoner and gunner attires from Final Fantasy X and Final Fantasy X-2 respectively were included mainly because of the Final Fantasy X/X-2 HD Remaster, released on PlayStation 3 after Lightning Returns: Final Fantasy XIII. Yuna's default Staff and Ring along with Tidus's Brotherhood and Buckler are equippable too.

Cloud Strife's SOLDIER 1st Class-based garb was included because of the demand of a French fansite (ffdream.com)[3], who gave to the producers, Yoshinori Kitase and Motomu Toriyama, two drawings of "Lightning Strife".[4] An Aerith Gainsborough-based costume was shortly available as part of the downloadable content between December 17th and 20th, 2013, but was taken down as it was meant to be acquired through redeeming a code obtained from purchasing a guide book or the Collector's Edition.[5][6]In February 2014, Aerith's outfit was reintroduced as a DLC. The Aerith outfit is not included in the PC version of Lightning Returns: Final Fantasy XIII, but the other downloadable garbs are.

Lightning's Mist Wizard garb originally had a victory pose many considered "out of character", in which she raised her arms and crossed her weapons behind her head. After its debut in the game's E3 2013 demo, Square Enix changed it to a pose similar to that of L'ange Noir, in which she puts hand on her waist.[7] Guardian Corps also got change in victory pose based on a battle stance Lightning often took in Final Fantasy XIII, as weapons in Lightning Returns don't fold like gunblades did in Final Fantasy XIII. Knight of Etro's victory pose is also changed.

Some of Lightning's garbs appear as cards. They are of the element associated with the garb in question.

Guardian Corps, Knight of Etro and Equilibrium garbs appear in Puzzle & Dragons as part of the Final Fantasy collaboration. They serve as outfits for Lightning and her evolutions.

In the Japanese release, Lightning's default garb is called Ambivalence. Ambivalence is the state of feeling simultaneously positive and negative emotions about the same thing, generally considered to be a psychologically confused state of mind with constantly fluctuating opinions. This could allude to Lightning's drained emotions, uncertainty of who or what she is anymore, or the morally gray area being Bhunivelze's savior puts her in. In the English release the standard garb is named Equilibrium, which carries a more positive connotation of being composed, tranquil and balanced, referring to Lightning's equal boosts to strength and magic.

Dust and Shadow is a Sherlock Holmes pastiche novel by Lyndsay Faye.

A number of garbs have French names. "L'ange Noir" means "black angel", "L'automne" means "autumn" and "Passion Rouge" means "red passion". "La fouldre" is the Medieval French spelling of "la foudre", which means "lightning". "Danse macabre" is French for "dance of death", a type of Medieval allegory depicting a personification of death in order to remind people of the fragility of their lives.

"Primavera" means "spring" in Spanish, likely as a reference to the garb's colour scheme, which is a mix of light green, white and gold.

Vajra means "thunder" in Sanskrit. "Bodhisattva" is the highest rank of Buddhist in Buddhism religion, who will becomes a new Buddha in the future.

Shogun, which literally means military general, was one of the hereditary military governors of Japan from 1192 to 1867.

Lilitu is the Babylonian name of the mythical figure "Lilith". The garb's Japanese name, Kiskil-lilla, is a straight transliteration of the Lilith figure described in Tablet XII of the Epic of Gilgamesh, ki-sikil-lil-la-ke. She is originally described as a demon, but was referred to as Adam's first wife in Jewish folklore.

Etro's will is referred to as the "Providence" in the Analects in Final Fantasy XIII. Although the word means the act of divine intervention, its use as a garb name for Lightning may be related to Etro, as Lightning gains supernatural powers in Lightning Returns and Bhunivelze likens her to Etro.

Pallas Athena is named after the classical Greek goddess of wisdom and warfare after which the city of Athens is named. In Olympian myth, Athena is protected by her Aegis, a formidable protective barrier identified as either a decorated animal skin or a shield and it afforded her near invincibility, much like the Heroic Guard ability attached to the garb.

Helter Skelter means "a tall spiral slide winding around the tower at a fair" in British. But the normal meanings is "in disorderly haste and confusion".

Dark Muse is a title of 'Dark Muse' books which is written by Gary Lachman.

Siegfried is another name for Sigurd, a hero of Germanic and Scandinavian mythology, who notably appears in operas by Richard Wagner.