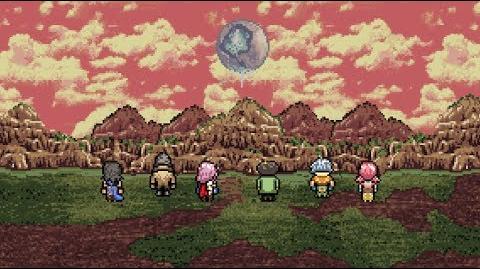 The scope of FINAL FANTASY XIII's mythology is so massive it could only be fully told across three games, and the saga will finally reach its conclusion on February 11, 2014. Join us as we look back on the stories of FINAL FANTASY XIII and FINAL FANTASY XIII-2 that shaped Lightning into the heroine she is today, as she and a band of unlikely heroes came together to save the world.

Many of the spell effects are direct copies of spells from Final Fantasy VI and Mog's sprite is a modified version of the game's moogle sprite. The sprites of Sazh and the Final Fantasy XIII versions of Lightning and Snow are from Final Fantasy: All the Bravest, but many new ones are added to fill out their animations. The trailer is written in the same way as Ted Woolsey's Final Fantasy VI script, with the names of the main characters in capital letters.

As a crisis threatens the floating world of Cocoon, a small group of heroes will defy destiny in an attempt to save their home from chaos.

On the Purge train bound for the Hanging Edge, Lightning explains her motive to rescue her sister, Serah, who was branded a Pulse l'Cie by the fal'Cie Anima. Lightning and Sazh take control of their train and land in the Hanging Edge, where they meet up with Snow, Hope, and Vanille, other victims of the Purge.

The party flees into the Pulse Vestige where they find Serah, who entrusts them with saving Cocoon—the fal'Cie-powered floating world they live in—just as she enters crystal stasis. Anima stirs and brands the entire party as l'Cie, servants of fal'Cie, and they receive a vision of Cocoon falling towards the lowerworld of Gran Pulse.

Waking up with the crystallized Serah in Lake Bresha, Vanille urges the party to keep moving as PSICOM is pursuing them. Snow decides to stay with Serah, while Lightning and the others make for an airship in the Bresha Ruins. The airship crashes mid-flight, causing the four l'Cie to jump out.

In Palumpolum, Snow and Fang save Lightning and Hope from a PSICOM ambush, then make for the Palamecia to rescue the captured Vanille and Sazh. Galenth Dysley, Cocoon's Primarch, halts the party's escape and transforms into the fal'Cie Barthandelus bent on destroying Cocoon. The l'Cie are banished to Gran Pulse, and knowing they are the last hope of saving Cocoon, take action and defeat Orphan at Orphan's Cradle.

Vanille and Fang sacrifice themselves to create the crystal pillar holding up Cocoon and the restored Serah and Dajh return to the party. As everyone leaves, Lightning is swallowed by the ground and taken to Valhalla, where she becomes the Guardian of Souls.

Caius, who witnessed the death of seeress Yeul over four different timelines, battles Lightning as he aims to bring an end to time and Yeul's suffering. In New Bodhum 2 AF, Serah wakes up from a dream and finds a meteorite that landed outside. Noel saves her from monsters, then explains how Lightning sent him from the future to protect Serah. Together with Mog, they travel through a Time Gate and the Historia Crux to find Lightning.

Lightning meets them in New Bodhum 700 AF and reveals that Caius will use the new Cocoon in his plan to bring the end of time, prompting Serah and Noel to stop him in Valhalla. After the Triple Bahamut is defeated, Caius impales himself on Noel's sword when Noel refuses to kill him. Serah, Noel, and Mog arrive back to the mortal realm to find the new Cocoon rising up as the crystallized Cocoon falls, but Serah dies, causing Noel to worry for what is going to happen.

The trailer concludes with a clip from the opening FMV of Lightning Returns: Final Fantasy XIII. Five hundred years later, Lightning takes on her new duty as the savior.

Serah telling Lightning to save Cocoon.

The party on Gran Pulse.

The battle against Orphan.

Noel, Serah, and Mog in the Historia Crux.

The ending of Final Fantasy XIII-2.