A stone infused with lightning magicks. When shaken, these stones release an electrical charge sufficient to power a small airship.

Deals lightning damage to all enemies.

Stone imbued with a storm. Used as a power source in small airships.

Storm Magicite is a medium-ranked Storm Shard that can be Scavenged from Limpid Crystal on Zephyr, the Windward Isles and Tormelados, Isle of the Megalith or bought at the Sky Saloon in Chapter 6 for 541 gil (5% discount). It can be used to craft Storm Lance, Tempestblade, Rod of Lightning, Storm Wand, and Discharger.

This section about an item in Final Fantasy Agito is empty or needs to be expanded. You can help the Final Fantasy Wiki by expanding it. 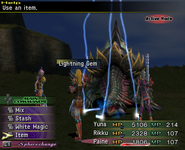