Final Fantasy Wiki
Register
Don't have an account?
Sign In
in: Characters in World of Final Fantasy

Cid Pollendina: Oh, shut up and help me remodel the Lightning (World of Final Fantasy) page!
Please expand this article into a full one. The following tasks need to be completed:This request can be discussed on the associated discussion page. Remove this notice upon completion.

A tough warrior who saves the twins from a potentially grisly end. She strikes so swiftly that her foes are blinded by the light.

Notes: Virtuous / Looks out for other people / On the stoic side / Genius with a sword / One of this age's greatest warriors

Reading Into the Outfit
Lightning is looking great in her outfit from LIGHTNING RETURNS: FINAL FANTASY XIII. But does that mean her soul might actually be over 500 years old? No wonder it only took her 21 years in Grymoire to become something of a living legend—and that was before the twins awakened her.

Lightning's superhuman skills drew the attention of Quistis and Squall, who tracked her down and persuaded her to lend her strength to the League of S.

Careless?
Between failing to catch the poison in Lann and Reynn's drinks and letting the bad guys get the upper hand, the Grymoirian Lightning seems to be surprisingly careless. Maybe it's because the burdens she bears are relatively light, and she's never been in quite as desperate a situation as her original. Note that she puts a surprising amount of faith in her allies in the League of S. Maybe she knows it's okay to slip up now and then if you have friends to lean on. And that makes her a little more human.

Watch and Learn
You may think, "If only I knew Odin's Zantetsuken. I could defeat any enemy with a single strike!" Sorry to get your hopes up, kiddo, but that's not necessarily true. Just going through the motions isn't enough; the technique requires power and skill. Imagine Odin's surprise, then, when Lightning attempted the move without so much as practicing!

Well, there's more to Lightning than meets the eye. The very first thing that Lightning thought to do with her new technique was destroy the golden flan (aka the Big Jiggle) and save Snow and her younger sister's village.

The player controls Lightning in the Nebula Storm minigame.

The player can take on an Intervention Quest that centers around Lightning.

As a Champion, Lightning can be summoned to assist Lann and Reynn in battle. Upon acquiring Lightning's Champion Medal, the player can summon her to attack one enemy with the ability Gestalt Drive. The party is also bestowed with

In the Maxima version, Reynn can take on the appearance of Lightning by equipping

Lightning's Champion Jewel. In doing so, she inherits the abilities

Flourish of Steel and Enhanced Thunder.

"Prismelody: Blinded by Light" plays when using Lightning's Champion Medal. The player may select this theme as the background music for battles from the Config section of the main menu, labeled as "Champion Theme: Lightning". This theme also plays in battles in Maxima version when Reynn is equipped with Lightning's Champion Jewel.

Lightning to the rescue

Drugged by a local 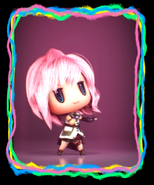 Guardian Corps outfit, seen only during the ending credits.