Lightning is a playable character in Final Fantasy XIII. She is a soldier who wields a gunblade, a sword that can transform into a gun. Her fighting style is fast and she is equally good as a physical and magical fighter, easily able to gear toward either role via equipment choices. She specializes in Lightning-elemental magic, and her Eidolon is Odin. Her trademark attack, or "Limit Break", is the Army of One, and her signature weapon is the Blazefire Saber.

Lightning has balanced stats, making her versatile. Her outstanding trait is her speed: she may not hit the hardest, but she strikes the fastest. She has utilitarian aptitude for Magic and her second fastest casting speed makes her one of the most valuable magic users in the party. The player can emphasize either Strength or Magic in their equipment choices so that Lightning would focus on either strikes or spells when using auto battle; with balanced stats she may use them interchangeably slowing her down, as either constantly casting magic, or constantly attacking, is faster than alternating between the two. However, having balanced stats ensures Lightning can still perform well against enemies who are Halved/Resistant/Immune to physical/magical damage.

Lightning has low HP gain compared to the other party members. When everyone's stats are maxed out, only Hope will have less HP than her. Her victory pose is to return her gunblade to its holster.

Lightning majors in the Commando, Ravager, and Medic roles. Compared to most of her companions, she has high physical and magical attack stats (the second highest attack stat behind Fang, and tied for the second highest magic stat with Vanille). She thus uses both Attacks and Ruin effectively, although her weapons give the lowest stat boosts. As her weapon transforms, Lightning can do both long range and melee attacks as a Commando. She learns every skill except for Adrenaline and Deathblow.

As a Ravager, Lightning learns all four elemental "-strike" attacks, all elemental magic to the "-ra" rank, as well as Thundaga. Her second fastest casting speed behind Snow makes her potentially either the best or second best Ravager in the game, and she learns the physical strikes and spells he doesn't. Lightning's full ATB skill, Army of One, builds the target's stagger gauge based on the current chain count. It is not the best at staggering enemies, but it quickly boosts an already staggered enemy's chain gauge to 999%.

As a Medic, Lightning learns Cure, Cura, Esuna, and Raise, allowing her to heal HP and ailments as well as revive. However, her lack of Curasa puts her behind other Medics in post-game. She is an offensive Synergist, learning all of the basic protection spells save Veil and learning the "En-" series of spells. As a Saboteur, she learns all the debuff abilities, such as Deprotect, Deshell, Imperil, and Poison, but not Dispel.

Despite her low HP, Lightning can be a good Sentinel, as she learns all of the role's passive abilities, and is one of only two party members to learn the Elude ability, allowing her to avoid a large amount of damage from enemies. 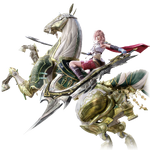 Lightning's Eidolon, Odin, is a large armored knight with a two-bladed sword joined at the hilt. In Gestalt Mode he transforms into the horse Sleipnir, which Lightning rides while wielding Odin's sword, Zantetsuken, split in two. When not in Gestalt Mode, Odin uses a combination of Thunder spells and physical attacks while acting as a Sentinel and drawing in enemy attacks. Lightning can help as a Ravager to boost the enemies' chain gauge, and as a Commando to keep the gauge high.

Lightning's initial weapon, Blazefire Saber, has inscriptions that read "Invoke my name - I am Spark" and "blinding instant" written in the Pulsian alphabet. In Cocoon writing, her name, Lightning, is also engraved on the weapon. Blazefire Saber is her balanced weapon, befitting her jack-of-all-trades role.

Gladius boosts her Strength, augmenting her physical attacks at the cost of her magical attacks, which is not a handicap considering she has access to all elemental strikes. Lightning's full ATB skill also scales from her Strength stat. Edged Carbine is the counterpart that boosts her Magic. These are commonly considered good weapons for upgrading, as their stat boosts outweigh special abilities from her other weapons. Having Lightning favor either physical or magical attacks reduces the amount of time she spends switching between attack types when AI-controlled or when using Auto-battle.

Hauteclaire has high stats, but has "Stagger Lock", meaning Lightning cannot stagger enemies (however, as long as the battle party has at least one member who can do so, it is not too much of a hindrance).

Axis Blade is her speed weapon with "Attack: ATB Charge" and the ability to synthesize "ATB Rate". It transforms Lightning into a speed demon and allows one to abuse Army of One and "Random: Instant Chain", as each of the 11 hits in Army of One has a chance to instantly fill an enemy's chain gauge while simultaneously allowing Lightning to gain ATB segments at the end. However, if upgraded into Omega Weapon, it will not synthesize the "ATB Rate" ability, and it maxes out at low stats.

Organyx has the highest stats of Lightning's weapons, but is crippled by the "Leadenstrike" ability, slowing her ATB gauge.

Lightning is playable in chapters 1, 2, 3, 4, 5, 7, 9, 10, 11, 12, and 13. As the main character, she is usually the one in the lead, though from late Chapter 9 onwards, the player gets free access to configure their line-up. In the Archylte Steppe, using Lightning as party leader allows her to ride a chocobo and find hidden treasures.

Lightning is a mandatory party member in the following boss battles: