Tetsuya Nomura
Lightning is a warrior of Materia in Dissidia Final Fantasy NT. She is an Assassin-type character who represents Final Fantasy XIII, using a sword as her main weapon. Lightning returns from her previous appearance in Dissidia 012 Final Fantasy, in which she had a slightly similar combat style.

Lightning's default costume is her Guardian Corps Uniform, her outfit from Final Fantasy XIII. Its first alternate coloration recolors her outfit to resemble her Equilibrium attire ( 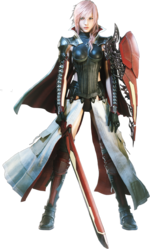 Her second alternate costume is Equilibrium, Lightning's main garb in Lightning Returns: Final Fantasy XIII, and also her main attire in the story of Dissidia Final Fantasy NT. The "Night Lotus" shield is featured on her garb in the opening and ending FMVs, but is absent in-game.

Her third alternate outfit is Midnight Mauve, a garb obtained during the main scenario of Lightning Returns in Yusnaan.

Midnight Mauve III.
Add a photo to this gallery

Excalibur.
Add a photo to this gallery

Materia summons Lightning back to World B. She rescues Noctis from a manikin version of herself, before briefing him on his new-found predicament. They are greeted by the Warrior of Light, and together decide to visit Materia's domain. Materia informs the reunited champions that they have been summoned to fight one another to provide the realm with energy that will maintain its existence. Lightning resents Materia for summoning her against her will, and after being introduced to Spiritus and his chosen warriors, decides to head off with Terra, Squall, and Zidane.

Lightning is a quick-hitting fighter with a focus on changing her role. She has a variety of Bravery attacks (projectiles and melee). The paradigms have 5 (10 in total) Bravery attacks that she can combo with. Commando is now a melee role that wallrushes. Ravager is now a magic role with projectiles that can set up for Commando wallrush combos that do high damage, but can also be used for zoning.

Commando is a close-range role that has no vertical attacks. Ravager is a long to mid range role that has only one long range attack (Thundaga). Ravager's projectiles are of low priority and she has a long cooldown on her Bravery attacks, making her vulnerable. Her HP attacks have quick execution and are close to long range, but aside from Lightning Strike, are easy to dodge.

Lightning has been slightly reworked with her Bravery attacks' cooldown reduced, and her Ravager-to-Commando combos have been given faster execution, but lower damage output.

Lightning can shift paradigms, thus changing her Bravery attacks. The Commando paradigm is used for up close enemies, and Ravager from a distance.

EX Skill: Army of One - Send targets flying and restore some of Lightning's HP on hit.

Lightning alongside the other 14 main characters.
Add a photo to this gallery