The Lightbringer (ライトブリンガー, Raitoburingā?), also known as Illumina, is a weapon in the Final Fantasy series. It is usually one of, if not the strongest sword available, and is associated with the Holy element, meaning it is particularly effective against the undead. It functions as a ranged weapon in Final Fantasy IV and VI.

A sword that casts Holy when used.

The Lightbringer appears from the Final Fantasy I & II: Dawn of Souls port onward, and is the Red Wizard's ultimate weapon. It can drop from Death Gaze in the Whisperwind Cove. If used as an item, it will cast Holy. It provides +50 Evasion, +7 Strength, Agility, Intelligence, and Stamina, and has Attack of 48, Accuracy of 40 and Critical of 37.

The Lightbringer appears in the Advance and Complete Collection ports, and is Cecil's best weapon. It is obtained by performing noble deeds, as is a Paladin's job, in Cecil's Lunar Trial. It randomly casts Holy when Cecil attacks with it. It has an Attack of 255 and an Accuracy of 49. It also adds +15 to Strength, Stamina, and Agility. This weapon is metallic and unusually, deals normal damage from the back row.

The Lightbringer was dummied out, and the only way to acquire it is through hacking via Homebrew. The description says "Removed from title", as with many other items available in Advance version that do not appear. It can, however, be used as a weapon. It has an Attack of 255 and an Accuracy of 99%. It also adds +15 to Strength, Stamina, and Speed.

Lightbringer (originally translated as Illumina) is the most powerful weapon and sword obtained by betting the Ragnarok in the Dragon's Neck Coliseum. It has an attack power of 255, and increases Strength, Speed, Stamina, and Magic by 7 and increases Evasion and Magic Evasion by 50% each.

It has a random chance of casting the Holy spell in addition to its attack. It consumes 20 MP each turn to perform an automatic critical hit, and enables the Bushido and Runic commands (although Cyan can't equip it without a Merit Award). The weapon is a long range weapon. Terra, Locke, Edgar, and Celes can equip it.

In the SNES version, due to the Evade bug, the Evasion bonus does nothing, and the Magic Evasion bonus also affects physical attacks. Lightbringer is affected by the Capture glitch.

Lightbringer is a level 40 sword that provides +44 Attack and is bought for 620 gil.

The Lightbringer is stolen from Rolan and Lucifer during their boss battles. The sword has an attack and a magic attack of 11 and is Light-elemental.

Lightbringer is a holy sword, equippable by the Jobless and Paladin classes. It provides 75 Attack Power and 20 Hit Rate, is Holy-elemental, effective against undead, and gives Strength +3 and Wisdom +3.

Lightbringer is a level 100 exclusive weapon for Cecil, and provides +69 Attack, -1 Defense (+1 Defense when in Paladin form), and the Sneak Attack effect. It can be obtained by trading 182,800 gil, Lustrous Sword, Twin Form, and Knight's Hope x5.

No enemy likes having a light shone in its face. Even less so a sword of light.

A sword imbued with light. It was once wielded by the hero of legend from a faraway world. In the darkest of nights, it shines bright like the morning star in the midnight sky.

One of the Twelve Radiant Arms. A great sword infused with holy light. The sword grants power to its wielder, and leads them to destroy evil with its powerful light. It is believed to be a sword bestowed by a god of light, but no one knows for sure. Only those who have shown their might to the Wandering Dead Hero, Dabih, can hold this sword.

A sword from a faraway world. It appears to bestow various blessings upon those who wield it. In its world of origin, the sword is said to have been carried by a magitek knight who, despite her young age, rapidly rose through the Gestahlian Empire's ranks to become a general only to eventually become a deserter.

Lightbringer is a Sword obtained during the King's Knight event, Conqueror of Izander. It provides 96 ATK, is Light-elemental, and when equipped by Ray Jack, enables usage of the ability Morning Star.

Lightbringer (FFBE) is a Great Sword obtained by defeating Dabih in the Chamber of Arms. It provides 135 ATK, is Light-elemental, and has a 20% chance of countering with Holy once per turn.

A sword wielded by Braev the Templar.
Sage Yulyana entrusted the sword to Braev along with the templar asterisk.

In Bravely Second: End Layer, Lightbringer is a greatsword that provides 53 P.ATK, 85 Aim, and deals 50% more damage to dragonkind. It can be bought in Chompshire for 200000 pg. 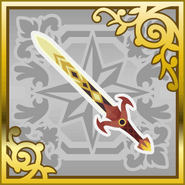 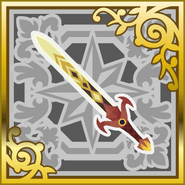 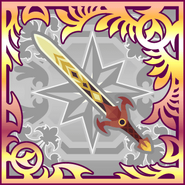 Lightbringer is an alternate name for Lucifer. [view · edit · purge]Lucifer is a Latin word (from lucem ferre), literally meaning "light-bearer". In English, "Lucifer" generally refers to the Devil, although the name is not applied to him in the New Testament. The use of the name "Lucifer" in reference to a fallen angel stems from an interpretation of Isaiah 14:3–20, a passage that speaks of a particular Babylonian King titled Morning Star (another name for the planet Venus) as fallen or destined to fall from the heavens. In 2 Peter 1:19 and elsewhere, the same Latin word lucifer is used to refer to the Morning Star, with no relation to the Devil. In post-New Testament times lucifer has often been used as a name for the Devil, both in religious writing and in fiction, especially when referring to him before he fell from Heaven. Lucifer is also one of the Seven Princes of Hell, representing the Sin of Pride, often seen as the worst of the Seven Deadly Sins.

[view · edit · purge]Illumina means "one who, or that which, illuminates".