Terra arrives at a land to the south together with the Onion Knight.
Questions over her own powers deepen like the snow on the field they face...

Terra is continuing to travel with the Onion Knight in search of her crystal after the Knight finds his own. Terra is very anxious and worried, wondering why she lost her memories earlier on. Onion Knight promises to protect her and the two continue onward. As they journey Terra admits she's concerned over her lack of progress towards her Crystal. Onion Knight shows her his and tells her someone told him that the Crystal appears when you follow your strongest feeling. Terra doesn't have such a feeling yet, but Onion Knight assures her she'll find her Crystal eventually.

Eventually Kefka appears to them and taunts Terra with her forgotten memories, telling her she's more suited to serving under Chaos due to her destructive powers. Kefka tells her about when she attacked Onion Knight, and the frustrated Onion Knight attacks Kefka. Kefka teleports them both away in a rage, leaving Terra to continue on alone. Hesitant about fighting the manikins by herself, Terra reluctantly continues and manages to defeat them, but Kefka's words still trouble her. Suddenly Terra's powers begin to overwhelm her. Cloud appears and attacks her without a word. Terra wins, and Cloud tells her he fought her to calm her powers, unsure of what else to do. Terra tells him what happened to Onion Knight, and Cloud decides to accompany her to rescue him.

Cloud asks Terra why Kefka is targeting her, and she tells him Kefka desires her powers, and she has to keep moving forward in spite of her fears and hesitations. Cloud shows her Firion's wild rose and tells her that Firion can keep fighting because he has a dream he wants to see fulfilled. Terra admits she never had a dream because it frightened her to think about the future, but now feels inspired by Firion's dream and decided to fight to see a world like the one he dreams of, where flowers can bloom and she doesn't have to be afraid.

Eventually, the duo find Kefka, who tries to tempt Terra into allying with him, but Terra has new confidence and refuses to submit. This enrages Kefka, and the Cloud of Darkness appears and attacks Cloud, who is saved by a sudden appearance from the Onion Knight, leaving Terra to battle Kefka. After initially fleeing from him, Terra faces Kefka and finally overcomes her fear of her power in order to defeat him. Kefka fades and Terra obtains her Crystal. The three continue on to Cosmos' throne together, Terra silently reciting that even if a dream is insignificant, it can give a person the strength they need to see their dreams come true.

"Beautiful snowfield, isn't it. kupo? And I need your KP for its upkeep, kupo!" — Moogle Shop

"Hi. Can I help you find anything? We don't have onions, but we got other things, kupo!" — Moogle Shop

A Multichain at B3 or a Round Chain at C3 will chain three of the enemies present, and a Jump Chain at D3 will allow the player to make use of the blue emblem. Enemies here and throughout Terra's story use accessories that greatly enhance their ability to build up their EX Gauge when they are inflicted with Break status.

A Straight Chain at C3 will chain all four enemies present while also triggering the Booster x5 Emblem.

A Multichain at D3 will chain all present enemies.

A Cross Chain at C3 will allow the player to chain all five enemies with the Booster x5 Emblem activated. The end piece is intially just another Manikin, but immediately after defeating it the player must face the stage's true boss. The tile at E3 that allows access to the end piece will not appear until the player defeats the Delusory Warlock at B2 and the Phantasmal Harlequin at D2.

A Multichain at C4 will chain all present enemies, but will activate the Emblem to boost the initial Bravery of both fighters. If the player does not wish this to occur, a Multichain at C2 will still chain all five enemies but without the Emblem. Enemies in this gateway use a different set of accessories than previous opponents - they enter battle with a full EX Gauge and gain a 32x multiplier when close to the player, which in tandem with a Hyper Ring and Muscle Belt greatly increases their damage output. The player is advised to keep their distance against these enemies. The Expert Battle Piece has a Hyper Ring and gains a 17x multiplier when the player has enough Bravery to kill them.

The only way to chain all enemies here is with a Multichain at D4, but this will force the player to fight on a Magic Damage 0 Emblem, which will greatly hinder them as Terra's attacks are all magical in nature. Thus the player will have to rely on Chase attacks, which are physical, or Cloud as an Assist. 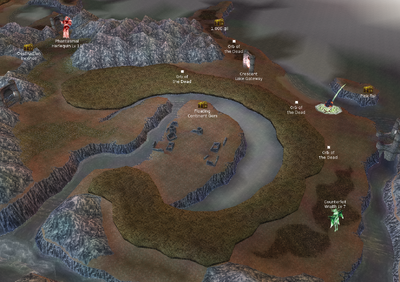 A Cross Chain at E4 will chain all four enemies, with the emblem boosting the player's initial Bravery and making it easier to meet the KP Chance. However, this does not earn the player the most KP; to do so, one must use a Jump Chain from F4 on the KP +1 emblem, then tackle the Transient Witch at C2 separately; this earns 19 KP instead of the 16 earned from the Cross Chain.