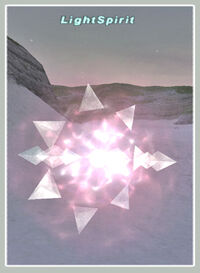 Light Spirit is one of the elemental spirits callable by Summoners in Final Fantasy XI. It can be learned at level 1 from a Light Spirit Pact, which can be obtained from many different Notorious Monsters and battle events, or bought from the Auction House if sold by other players.

ight Spirit pacts tend to be harder to come by than most of the other Spirit Pacts, and they have a unique ability (among the spirit summons) to cast Enhancing Magic and Healing Magic on the Summoner and his/her party members, even while not in battle. The Summoner has no direct control over the Light Spirit's spellcasting, but can influence it through various actions (such as casting Haste on oneself to prevent Light Spirit from casting Haste).