Creates [Barrier] around all allies.

The Light Curtain (光のカーテン, Hikari no Kāten?), also known as Shining Curtain and Glow Curtain, is a consumable item from the Final Fantasy series. It offers a form of protection, usually Protect.

The Light Curtain only appears on the Dawn of Souls and 20th Anniversary remakes. It is dropped by several powerful enemies and can be bought in the Mage village of the Whisperwind Cove.

Curtain with the same effect as Reflect

The Light Curtain casts Reflect on one target.

The Glow Curtain is an item that teaches the Auto-Reflect ability to a Guardian Force. It can only be gotten through refining x100 Dragon Skin into x1 Glow Curtain, or modding the Carbuncle card for x3 Glow Curtain.

Casts Protect on one character.

A Light Curtain is also used via Lady Luck's Item Reels ability by getting a Cherry.

Light Curtain is an item obtained from

Zadnor. It is stored in the Lost Finds Cache and grants access to the Light Curtain lost action while in

Save the Queen areas. The lost action grants the user Lost Reflect, which reflects most magic attacks for 10 seconds.

Light Curtain activates at the beginning of a stage, and reduces all damage to the party by 15% for the entire stage. It is obtained randomly after completing a Music Stage.

Light Curtain is an item that can be equipped. It is used at the beginning of the Music Stage and reduces damage taken by the party until the end of the stage and has low strength. When used during Quest Medleys, it reduces damage to party by 15% for next stage. It is obtained after completing a Music Stage. 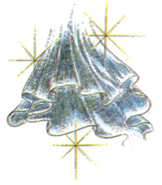 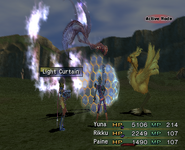