Lickety-Split Thundaga (すくすくサンダガ, Suku Suku Sandaga?) is a recurring ability in the series. It is an ability used exclusively by Kefka Palazzo, and is a variation of the Thundaga spell.

Lickety-Split Thundaga is a magic Bravery attack used by Kefka, learned at the start of the game for the ground version and level 16 for the aerial version. Both require 20 CP to equip (10 when mastered), 90 AP to master, have Ranged Low priority, and induces Wall Rush and Chase. Kefka fires a stream of lightning at the opponent, and in EX Mode, will fire two streams of lightning. When using the attack, he'll also yell "Zappo!"

Lickety-Split Thundaga returns as a Bravery attack for Kefka, now requiring 30 CP to equip (15 when mastered) and 80 AP to master for both versions. It is otherwise identical to its previous version. 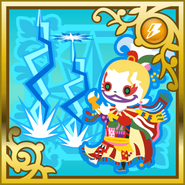 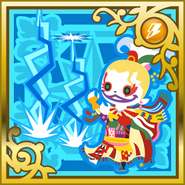 Final Fantasy Record Keeper.
Add a photo to this gallery
Retrieved from "https://finalfantasy.fandom.com/wiki/Lickety-Split_Thundaga?oldid=2385831"
Community content is available under CC-BY-SA unless otherwise noted.