Cavern of Earth, Chaos Shrine (past)

The Fiend of Earth, who drains and decays the soil itself.

Lich is the Fiend of Earth from the original Final Fantasy. He appears at the bottom of the Cavern of Earth. He is undead with the appearance of a skeleton.

As the Earth-elemental fiend, Lich drains the power of the Earth Crystal, rotting the soil in Melmond. Lich was the third fiend to awaken, doing so shortly before the Warriors of Light set out on their quest. When the Warriors arrive at Melmond they find the earth rotting and people dying. They learn a vampire is blamed and travel into the nearby Cavern of Earth to defeat it, but upon returning to the town they see the earth is still decaying.

Using the Star Ruby found in the cavern to gain passage through the Giant's Cave, they travel to the Sage's Cave where they are told by Sadda that the vampire was only working for a greater force: Lich. The Warriors return to the Cavern of Earth where they find the Earth Crystal. After confronting Lich, the party prevails. The Earth Crystal shines again, and the land rots no more.

Later, the Warriors fight a younger version of the Lich in the Chaos Shrine 2000 years in the past. They defeat him once more, preventing him from journeying to the future and causing the earth to rot in the first place.

Lich has a 75% chance to cast a spell and 25% chance to attack each round. Lich's physical blows have a chance to paralyze whoever it hits. His spell cycle is as follows:

Lich is the hardest boss faced at that point in the game. As an undead enemy, he is weak to Dia and Fire. Lich uses elemental spells and can complement his physical prowess with Haste.

Fira, Red Fangs and Firaga (if available) are effective. Mere physical attacks will not be very effective; they should be augmented with Haste and/or Temper.

It is recommended to use a White Curtain, Blue Curtain and Red Curtain, or alternatively the spells NulFrost, NulShock and NulBlaze to halve the damage from Lich's elemental spells. The party should increase evasion with Invis or Blink to avoid his powerful physical blows and decrease the chance of getting paralyzed.

In the NES version, a lucky pair of shots with FIR3 and DIA3 can, potentially, kill Lich in one round (as the spells do extra damage to undead and both have high-end damage at or over 200, while Lich only has 400 HP) or at least leave him in a state where one more round of spells will assuredly kill him. This tactic is less advisable in later versions, as Lich's HP has been doubled (or more).

When the Warriors of Light travel through time they must fight the Lich of the past. The "Lich Room" in Chaos Shrine contains many of the monsters from the Cavern of Earth and the stairway to the next floor is guarded by the past Lich, a fixed encounter, which can be repeatedly triggered by walking through the same spots.

His spell cycle has been altered to use only level 8 black magic:

His stats are improved and he loses his weakness to fire.

Everyone should resist Time and Death elements. Physical attacks should be augmented with Haste, Temper and Saber. White Mages/Wizards should cast Diaga or Diaja, while Black Mages/Wizards should use Thundaga or Flare. For versions earlier than Final Fantasy I & II: Dawn of Souls, players may wish to hold off on attack magic to conserve their spell charges, as Lich is only the first of several upcoming boss fights and there is no way to replenish charges while inside the dungeon.

Lich is the only Chaos Fiend who does not talk to the party before fighting them. The same occurs when it reappears in Final Fantasy IV: The After Years. In the remakes the Lich does talk to the party.

Lich makes a major appearance in the Final Fantasy parody webcomic 8-Bit Theater, where he is one of the Four Fiends, and guards the Earth Orb from the Light Warriors.

Due to a bug in the PSP version, if the game crashes while in the Lich fight, more Liches may spawn. This may also happen if Final Fantasy is closed during the Lich fight. This can cause problems with leaving the cave. 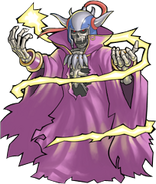 Artwork for the GBA version.

Blizzara in the 20th Anniversary version.

Lich in the 20th Anniversary version.