Cid Pollendina: Oh, shut up and help me remodel the Lich (Dimensions II) page!
Please expand this article into a full one. The following tasks need to be completed:This request can be discussed on the associated discussion page. Remove this notice upon completion.

Earth
Lich, the Chaos of Earth is an antagonist in Final Fantasy Dimensions II. He is one of the Four Chaoses sent to wreak havoc throughout the timeline during the Crystal of Time arc.
See also: Lich

Lich appears as a robed skeleton creature that wields a staff. His overall appearance is based on Lich's multiple sprite designs from the original Final Fantasy.

In addition, Lich appears as a boss during multiple side quests. His first side quest appearance is the "Lich of Earth" quest, which can be done after completing "Crisis Time" main story quest. A version known as Lich Mind is fought as part of the "Scars of the Rotten Earth" subquest after defeating him in Chapter 5-2. Lastly, he appears as an optional boss on the 26th floor of Babil Tower. 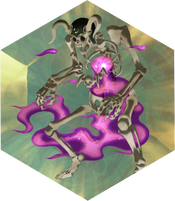 There are two versions of Lich's signet available for Morrow to obtain throughout the game. The default Lich signet is obtained during the "Chaos of Earth" main story quest, this version teaches Kill-type abilities to Morrow. The second version can be obtained as a first-time completion reward for defeating Lich in Babil Tower. Lich's second signet teaches Morrow Earth Flare-type abilities.

In the original free-to-play versions of the game, Lich's role was overall the same as in the premium releases. However, Lich also appeared as an event boss multiple times throughout the game's life cycle. 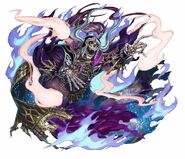