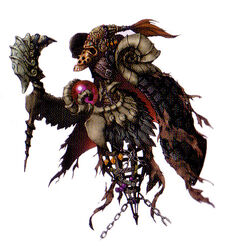 In Final Fantasy Crystal Chronicles, the Lich appears as the boss in the ruins of Rebena Te Ra. To even touch it, characters must cast Fire and Blizzard, or Holy, on the two poles on either flank of the room, then a Holy spell underneath it to reveal the Lich, allowing characters to do damage. Casting Gravity on it first will reduce its HP by half, though this only works once. Its attacks are all rather straightforward, casting Chain Lightning, which takes about five seconds to detonate, Meteor, and summoning Skeletons.

Defeating it with a high score will sometimes reward the player with the design for a Dark Weapon, which allows Clavats to forge their ultimate weapon, the Ragnarok.

In Final Fantasy Crystal Chronicles: Ring of Fates, the Lich is revealed to be a female Yuke. She appears as a boss in two locations, the Shadowland and inside Rebena Te Ra's Castle.

Afterward, when the party are sent off to Sinners' Isle for being accused of attacking the King, they travel to the Shadowland to battle the Lich and defeat her. When they return to Rebena Te Ra, the female Yuke reveals herself to be the Lich and the party battles her one last time.