Li'Telor is a region in Final Fantasy XI. Located in the northeastern portion of the Mindartia continent the massive, ageless trees found in Li'Telor seem to reach the heavens. Deep within these woods, the ancient ruins of Ro'Maeve serve as a reminder of a world-wide disaster, long since past. This region requires the Rise of the Zilart expansion to access.

Main article: The Sanctuary of Zi'Tah 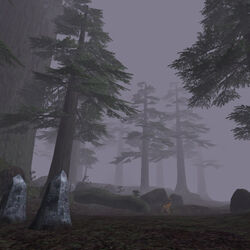 The coniferous forest that is at the entrance to the Li'Telor region. At noon little light reaches the forest floor, blocked by trees that are thousands of years old; however, throughout the forest are crystals that are illuminated and shine onto their surroundings eerily even during the day. Here was believed by the people of Vanadiel to be the region of gods, and was rare for people to visit unless on pilgrimage to Ro'Maeve, or Goblin Highwaymen.

The region's outpost is located in this zone, near the center. Note that some sections of this forest is located off the map. 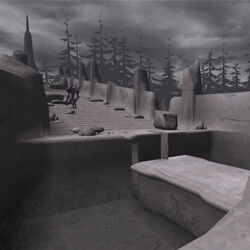 This is an ancient area slowly decaying into ruins. A series of levels lead up to the Hall of the Gods. The high walls, made of cermet, make for a labyrinthine atmosphere, where dangerous beasts can lurk behind the next turn. When the full moon is unclouded, certain architecture in this area seems to activate, giving the place some sort of ambient life.

Caution is suggested when traversing this dangerous area. All enemies in this area are of the Arcana ecosystem, and they do not take kindly to spellcasting.

Hall of the Gods[]

Main article: Hall of the Gods 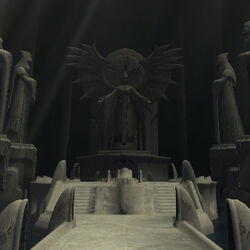 This long corridor is the final safe resting place before entering the vast ethereal expanses of the aerial Tu'Lia sky shrine. It very much resembles a church or temple, as it no doubt once was. Statues adorn the interior of the hall including a grand statue of the Dawn Goddess Altana, as well as a large statue of Promathia; one of the few monuments to the Twilight god that still stands in Vana'diel today.

The Boyahda Tree, the largest tree of Zi'Tah, is said to have lasted tens of thousands of years. The area where players can adventure is actually the cave made by the decaying roots of the tree, itself. The fantastic space is wrapped in light by the shining moss growing on the cave walls. Also a subspecies of the atrocious walking plant Mandragora comes to this region for nesting and food.

Located within The Boyahda Tree, this tunnel is the home of the lightning protocrystal. The lightning avatar Ramuh sleeps within the ancient crystal.

Nestled high above the the peaceful tree-lined areas of The Boyahda Tree and The Sanctuary of Zi'Tah lies this treacherous plot of land home to some of the strongest creatures to roam Vana'diel. The aery, or nest, while home to some more common animals, is the lair of the fearsome Fafnir and Nidhogg.