Cid Pollendina: Oh, shut up and help me remodel the Lhusu Mines page!
Please expand this article into a full one. The following tasks need to be completed:

The Lhusu Mines: One of the richest veins in Ivalice.

The Lhusu Mines is a location in Ivalice in the world of Final Fantasy XII. It is located in Bhujerba, which resides on the sky continent of Dorstonis. Among the mines' interesting features is that, as it is located on a sky continent, the deeper one gets into the mines the lighter it gets. Normally the mines are protected by a paling, however, it has fallen and monsters have invaded the site. It can be speculated the paling has been allowed to fall deliberately, as to prevent the Empire from obtaining more magicite. Miners around town talk how the mines yield much less magicite and of lower quality than before, and when the party ventures inside, no mining appears to be taking place.

A crystal mine located on the sky continent of Dorstonis. Many years have passed since the ore veins were first discovered here, yet even today, high-quality ores are found and processed in these well-worked shafts. Many claim that the success of the mines is due to a project begun many centuries past by the Ondore family, whereby mining across their domains was closely regulated, never permitting too much to be drawn from one place, thereby allowing the magicite crystals to naturally recover. The Lhusu Mines are most famous for their high caliber of skystone, the material which enables airships to ply the skies, and memstone, a variety of magicite that can store sound and even images in its unique crystalline structure. Unfortunately, the dense concentrations of Mist in the mines lure all manner of beasts, and when mining expeditions are planned, palings must be erected to keep such creatures at bay.

Like the Henne Mines, Lhusu Mines is a magicite mine. It is located near the city of Bhujerba, and previously was a major source of magicite for the Archadian Empire. Lhusu Mines is still providing the Empire's Draklor Laboratory with magicite, but it's done in secret in a venture led by Dr. Cid and funded by Vayne Solidor. Judge Ghis has come to Bhujerba to talk to Marquis Ondore about the affairs, and the two visit the mines.

Vaan, Balthier, Fran, and Basch also head into the mines to rescue Penelo, whom Ba'Gamnan is holding hostage there. Larsa Ferrinas Solidor, Vayne's younger brother, joins them as well. He uses the alias "Lamont" to stay undercover, as he wants to find out if the rumors are true about Bhujerba providing Draklor with magicite to create manufacted nethicite. Penelo is being used as bait for a trap set by several bangaa to capture Balthier, but once Balthier and friends set foot in the mine, the bangaa deem her worthless and release her.

The party explores the depths of the mine without finding Penelo. "Lamont" finds a magicite vein and his suspicions are confirmed. Balthier questions him about this and realizes "Lamont's" true identity, but before he can squeeze answers out of him, Ba'Gamnan and his gang interrupt them. Larsa runs out of the mines telling the others to follow, and Balthier and his friends have the chance to either fight Ba'Gamnan or follow Larsa.

The freed Penelo runs through the mines and bumps into Ghis and the Marquis. Ghis is furious having found a civilian in the mines that houses Empire's secrets, but Larsa steps on the scene and rescues her, taking her away with him. After Vaan and his friends find out where Penelo has gone they follow.

Later the party can return to the mines to fight several marks, including the legendary Gilgamesh.

The Lhusu Mines can be ventured in from the Skycity of Bhujerba in Lhusu square.

In the original version, Knot of Rust is the most common treasure in the mines, all treasures being able to give one. Motes are the other common treasures. With the Diamond Armlet equipped there is a small chance of obtaining an Elixir or Hi-Ether from the treasures instead. During the player's first visit, there can be a treasure in Transitway 1 that may contain a Killer Bow. In Site 2 area, before the spot where Rocktoise is fought, there can be a treasure that may have the Assassin's Dagger.

Later, when the Antlion hunt becomes available, the player can venture deeper into the mines. In Site 9, behind the minecart, the player may find a Morning Star, a powerful weapon to obtain early. At the deepest end, in the cave where Antlion is fought, the player may find the original version's ultimate gun, Fomalhaut, and since the treasure respawns it is possible to to obtain multiple Fomalhauts. Deeper into the mines still, with the Site 11 Key the player can go to the deepest reaches of the mines, where Gilgamesh is fought. Treasures here are either Knots of Rust, Motes, or Ethers. The northernmost area where the player must cross through a hidden passage has a treasure that has 50% chance to spawn, but when it does, it will always be the Aegis Shield. Once the treasure has been claimed, it will never respawn. The dead-end on the northeast side of the Site 6 South area can have the armor Maximillian, and this treasure also respawns.

In the Zodiac versions, the treasures are different. At the Shaft Entry, the player can find the Silence spell. Transitway 1 has the Numerology technick. Site 2 has a bug where the treasures there disappear after fighting Ba'Gamnan. Site 3 has some weapons. Site 9 has Indigo Pendant, a good accessory, as well as Expose, a good technick. Site 11 has numerous good weapon, and Lache Span has Dragon Whisker. Site 5 has the Bone of Byblos, a new weapon added to the Zodiac versions. Site 6 South has the Germinas Boots near the south exit to the save crystal in the small room; the chest has a 25% chance to appear, but it always contains the Germinas Boots. Germinas Boots is one of the best accessories to equip on a Shikari or Archer to boost their damage due to their large Speed boost.

Site 6 North has Maximillian, the best heavy armor, and the Whale Whisker. In the depths of the mines, the player can find the ultimate black magick spell, Scathe, and the katana Masamune with an excellent combo-rate.

To obtain the key to open the gate to the deepest reaches of the mines, the player must first complete the hunt for Antlion. Afterward, the Site 11 Key can be found in Phon Coast Hunters' Camp, next to a fallen Bhujerban.

To get deeper into the mines the player must complete the hunt for Antlion, after which the Site 11 Key appears in the Hunters' Camp in Phon Coast, on the ground next to a Fallen Bhujerban. 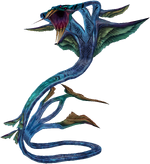 The Nidhogg is the fifth mark to be listed in the Clan Primer and arguably the toughest Rank I Mark. The hunt becomes available after Vaan has masqueraded as Basch in Bhujerba, and the party has been given permission to enter Marquis Ondore's estate. Nidhogg is found in the Transitway 1 area of the Lhusu Mines, and the petitioner is conveniently located right at the mines' entrance. The player will receive a Great Serpentskin after the battle, which can be given to Dantro's wife in Dalmasca Estersand as part of the "patient in the desert" sidequest.

Diabolos is a Rank VII Mark found in the Site 11 area of the Lhusu Mines. The hunt becomes available after the events in Giruvegan. The hunt is petitioned by Miclio in Bhujerba.

Rocktoise is an Elite Mark whose hunt can be undertaken after the player returns to Rabanastre after escaping from Barheim Passage. Rocktoise was originally a small pet named Carbo, owned by a moogle named Pilika who works in the moogle-operated Technick shop in Bhujerba. Pilika had also kept a snake named Bianca, which still lingers within the shop.

The Antlion is an Elite Mark whose hunt becomes available upon reaching Mt Bur-Omisace, so if the player wishes to fight it with Larsa in the party, they should return to Rabanastre upon reaching the mountain to accept the hunt, because Larsa will leave the party if the player proceeds further in the story. Antlion can be found in the Site 9 area of the Lhusu Mines and is petitioned by Niray in Bhujerba/Staras Residence.

Gilgamesh is found in the Lhusu Mines and is fought twice. The first is on the bridge just to the west of the Gate Crystal, in a homage to the "Clash on the Big Bridge" (which is also the name of the hunt) from Final Fantasy V; a reworked version of the iconic theme plays during both fights. Gilgamesh escapes after defeat and the player must find the Site 11 Key and venture deep into the mine to Site 7. During the second fight Gilgamesh's HP is triple what he previously had, and his stats are raised. 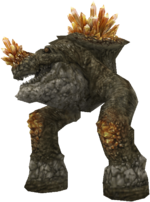 There is a 20% chance Aerieel will spawn in the Oltam Span.

Gemhorn shows up in the southwestern most part of Site 11 after the player has defeated all foes in the area, including the mimic "treasure chests."

There is a 20% chance that Bombshell will appear in the Lasche Span, so one may hunt the creature by exiting and reentering the area until it spawns. One of the items the Bombshell drops is the rare weapon Yagyu Darkblade, the strongest (second in Zodiac versions) ninja sword with an attack of 80.

To find Disma the player must have spoken to the "Huntmaster" in Phon Coast and defeated Thalassinon, which will trigger the start of the Rare Game quest. Disma is found in either Site 5 or Site 6 South. It has a 5% chance of replacing a Dark Lord in the area. Once it has been felled, it will never respawn. Disma is one of the toughest monsters.

The map can be bought from a Cartographer's Guild moogle in Lhusu Square for 650 gil.

The candle to reveal the rest of the map can be found in the southern most section of Site 5. 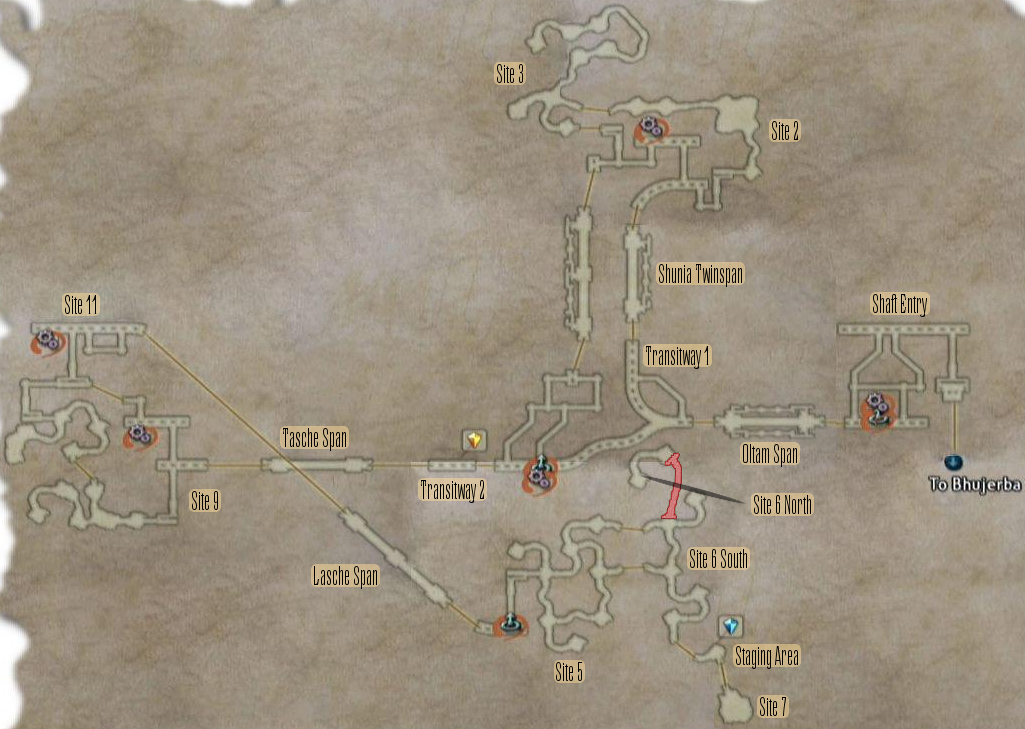 The background music for the entirety of the Lhusu Mines is "The Stone's Secret" (魔石の秘密, Maseki no himitsu?).

The party heads for the Lhusu Mines to rescue Penelo, who has been taken prisoner by Ba'Gamnan and his cronies.

The scene where Ba'Gamnan holds Penelo hostage in his hideout

is censored from the original Japanese version of Final Fantasy XII.

Party descending to the Lhusu Mines. 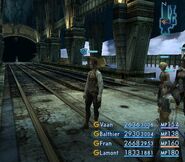 The party running from Ba'Gamnan.

Deep in the mines.