Leviathan (The 4 Heroes of Light)

Boss
Leviathan is a minor antagonist from Final Fantasy: The 4 Heroes of Light.
See also: Leviathan

Before the events of the game, Leviathan began to cause trouble in Liberte around the time of Glassworks Fair. Around this time Leviathan had sent his minions to make Captain Drake and his crew attack the city to steal all of the objects in Liberte's town hall. The Captain Drake and his crew stole Pione's vase with Lilibelle inside and the Rusty Compass. After the Rusty Compass was stolen, the Cetus was forced into an eternal slumber and city of Liberte was overrun by Leviathan's minions.

After being sent into the past, the party travels to Liberte a day before the events of the Glassworks Fair and help Pione by bringing Lilibelle for his vase. The next day, the party finds out that Captain Drake and his crew robbed the city of the artwork and kidnapped both Pione and Lilibelle. The party travels to the Pirate Hideout and discover that Captain Drake was being manipulated by Leviathan's minion. The party defeats the Sea Devil and free Pione and Lilibelle.

Captain Drake apologizes for his actions and gives the party the Rusty Compass. The party returns to Liberte and resurrect the Cetus. The party then takes the Cetus to the east and encounter Leviathan. The party defeats Leviathan and brings peace to Liberte. Later, Leviathan is revived within the Star Chamber, but it is defeated once more.

Leviathan is fought twice in the game, once on the world map outside of Liberte, and again in the Star Chamber.

In Bravely Default, Leviathan appears as a level 80 Nemesis in Norende.

In Bravely Second: End Layer, Leviathan appears as an optional boss fought near the Ba'al Crater as part of the Seven Sins sidequest and represents the sin of Envy. It gives access the Yōkai to the Diabolism spells Envy and Consume Life. 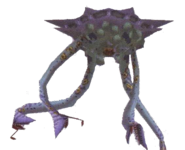