Goddess of the Seas. The Hydraean took rest under the Celluna Cascades after the Astral War, yet her ruinous fury carried on the waves, never dissipating. Besought by the Oracle Lunafreya, the tempestuous Tidemother rose once more.

Leviathan is one of the six Astrals of Eos in Final Fantasy XV. She is a colossal sea serpent who controls water, slumbering under the waters of Altissia. She is looked upon with both fear and respect. Prince Noctis forges a pact with Leviathan in Chapter 9.

She's been asleep for years. No one alive has ever seen her. But, given the Archaean's awakening, it's not beyond reason that the sea goddess could follow suit. And if she does, o-ho look out—the legends tell of a wrathful spirit with no love for mankind.

Like the other Astrals, Leviathan is based on a recurring summon in the Final Fantasy series, although in other games Leviathan has been referred to as being male. In Final Fantasy XV, she is a giant blue sea serpent with multiple wing-like appendages. She can appear in liquid form and manifests out of water. The people of Altissia, who revere her, believe she can appear in numerous forms, and she is thus depicted in the angelic statues around the city as well as the Leviathan Monument, which depicts her as a whale similar to Bismarck. The painting of the prophecy

at the Hall of History of the Citadel depicts Leviathan as a mermaid.

Leviathan is the largest Astral and known for her ferocity. She has little affection for mortals, and considers they should respect her unconditionally for her might. When Lunafreya Nox Fleuret awakens her, Leviathan attacks to intimidate her. She does seem to respect resolve, as when Lunafreya vows Noctis will prove his worth, Leviathan agrees to test him. Leviathan's summon condition is for Noctis to be near death, ignoring the state of his allies. In Final Fantasy XV -The Dawn of the Future-, Leviathan opposes Bahamut's attempt at destroying Eos, as she joins the other Astrals in blocking his Tera Flare.

Leviathan manifests from water. She can turn to liquid and summon tsunamis that can flood entire cities. She speaks with the Hexatheon language.

This wretched pile of bone and flesh, ignorant of that which governs All, comes to requisition the might of a goddess?

The Six used to coexist with the human civilization during the days of Solheim over 2,000 years ago, but in the wake of the War of the Astrals Leviathan fell into slumber in Celluna Cascades in wait for the prophesied time when the True King would save the world. A structure near her resting place became known as the Altar of the Tidemother where visitors would revere her.

Lady Lunafreya, the Oracle, wants to awaken Leviathan to ask for her to lend her powers to Noctis Lucis Caelum. She travels to Altissia and becomes sheltered by the local government. The first secretary of Altissia is reluctant to let Lunafreya perform the summoning, as Leviathan is known for her wrath, and she worries for the damage it would cause the city. Noctis negotiates with the first secretary and gains her alliance. Lunafreya is given the traditional trident of the Oracles to call for Leviathan, and after giving a speech to the masses as to her intentions, she approaches the Hydraean on the Altar of the Tidemother.

Leviathan takes offense to being awoken by a mortal, stating that Noctis must earn her power. She attempts to devour Lunafreya who repels her with the Trident of the Oracle. When Leviathan begins to test Noctis, she is attacked by Niflheim forces, and goes on a rampage. Noctis hitches a ride to Leviathan's side on a Niflheim magitek vehicle piloted by his friend Prompto, but when he asks for her power she rejects him. Lunafreya is stabbed by Chancellor Izunia of Niflheim while Noctis is unable to help her and uses the trident to call upon the souls of past kings of Lucis to empower Noctis, who fights Leviathan wielding the power of kings.

After Noctis wounds Leviathan, he is left lying unconscious on the remains of the Altar of the Tidemother. The Astral god Titan, who had forged his covenant with Noctis earlier, appears to shield Noctis from the enraged Hydraean. Leviathan submits and forges a covenant with Noctis. Her body disintegrates into light that surrounds Noctis and she disappears. Titan's earthen wall crumbling creates a tsunami that engulfs the upper city, as well as Noctis and Lunafreya. Leviathan now periodically appears to help Noctis during his battles whenever he is close to death.

Noctis continues on his journey to reclaim the stolen Crystal. When the train they are on is attacked by Niflheim forces, Leviathan appears to dispatch them.

After Noctis disappears inside the Crystal, the world is enveloped in the long night. Mankind comes together to defend the remains of civilization in wait for Noctis's return as the True King. As shown in Final Fantasy XV: Comrades, the Astrals forgive the Kingsglaive for their betrayal of the crown after they prove they want to protect the world. Leviathan, alongside the other Astrals, appears to the Glaives chosen to protect Angelgard, the island where the True King is to awaken, to test the worth of Glaives who stand trial before Bahamut in the name of defending Noctis.

After sleeping inside the Crystal for ten years Noctis returns to Insomnia to bring light back to the world. Ardyn Izunia places various obstacles upon his path, including cloaking the Citadel in a magic barrier, but Lunafreya's spirit sends the Astrals to pierce through it. As Noctis sits upon the throne and calls down the past kings, the Astrals show up and turn into energy, entering the Ring of the Lucii alongside Noctis and the kings.

In Final Fantasy XV -The Dawn of the Future-, Shiva, Ifrit, Titan, Ramuh and Leviathan to block Bahamut's Tera Flare after the latter absorbs the revived Lunafreya's darkness to energize it. Bahamut's death causes magic to vanish, including the Astrals.

Noctis obtains Leviathan at the end of Chapter 9.

Proof that Noctis has received Leviathan's blessing. The Hydraean may come to his aid in a moment of true peril.

Item description of the Mark of the Hydraean 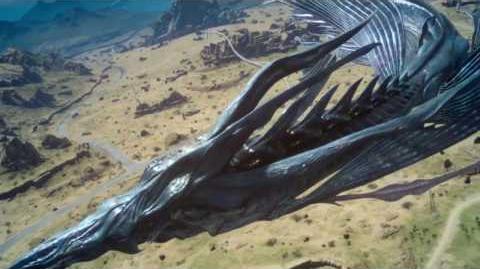 After gaining the Astral's blessing, the chance to summon them will appear randomly, and the player can summon once per battle (as long as summoning is enabled; the player can't summon in the locations for chapters 9–13, against training partners at camp, or in boss battles in Chapter 14 bar scripted events). Each summon can be called around once per in-game day, and each Astral has its own requirements to be considered during the "summon roll", which happens every 10 seconds. While possible to summon during the first roll, it is rare. Leviathan requires Noctis to be in Danger state and in an open enough area. She manifests out of water in the various locations where she can be summoned. Places where Leviathan can be summoned include areas around Hammerhead (manifesting of the body of water close to the Insomnia checkpoint), areas around the Vesperpool and Cape Caem, and Insomnia (manifesting out of the city's decorative water elements).

Leviathan is capable of disguising herself and traveling in liquid form. When summoned, she will rise out of the nearest body of water, and her presence amasses water all around the surrounding area. Lunging headfirst at Noctis to ensure his safety during the chaos, the waters then rise in an enormous maelstrom, engulfing all enemies in the area in a tidal wave.

Leviathan is fought at the end of Chapter 9. Noctis must defeat her by first dodging her attacks in the first phase, before finishing her off with Armiger.

Leviathan's battle themes are "The Hydraean's Wrath" for the first phase and "Apocalypsis Aquarius" for the second. The music transitions seamlessly as the battle advances. The music transitions to the "pre-end" section when the tornado appears, and transitions to the ending part for the cinematic ending.[1] The latter theme is a remix of "Apocalypsis Noctis" with more emphasis on the violins as well as some electronic guitars.

Leviathan recites a part of the lyrics of her second boss theme after agreeing to forge a covenant with Noctis ("Caelum, Terra, aversione. Magna, Parvus, reversusque."). This is subtitled (in English) as "Heaven and Earth, High and Deep, Birth and Return..."

Leviathan makes a cameo in young Noctis's dream world. She appears from the lake beyond the horizon. 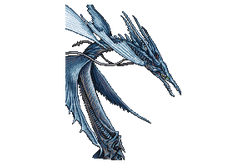 Tomohiro Hasegawa was in charge of art direction for enemies. He purchased fish, dissected them and looked at how light and surface reflection worked for designing Leviathan's scales.[3]

When creating Leviathan, we considered the work of Yoshitaka Amano, the designer of the original version. To make the creature realistic, we paid special attention to Leviathan's scale and texture. We tried to visualise Leviathan as a real, living creature based on the original image. This approach vastly differs from what was done in previous installments of the series. In addition, we assigned a gender to all summons. Even though she is not a human being, she features beautiful, silky smooth lines characteristics of a female being.

Two sea creatures swirling inside the royal aquarium of Caelum Via in Kingsglaive: Final Fantasy XV look very similar to Leviathan. The party's car, the Regalia, can have a Leviathan skin. There is also a fishing lure fashioned after her: Tidal Might Leviathan.

Altissia has a Leviathan monument depicted as a fish with a long horn protruding from the body, somewhat reminiscent of a real world narwhal, and resembling the in-universe Bismarck. According to custom, one can write a wish on a paper bird and if one throws it into the sea goddess's mouth, the belief is the wish will come true. If the player approaches the statue in Altissia they can do it once; the prompt will never repeat. It is unknown what Noctis wished. The plaque on the monument implies it was commissioned by Emperor Aldercapt. 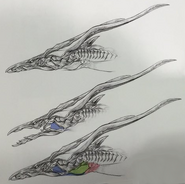 Leviathan being repelled by Lunafreya.

Leviathan in the Windows/Royal Edition.

Leviathan skin for the Regalia.