Lord of all waters, revered by the ocean-dwelling Sahagin.
Lurking in the lightless depths, Leviathan devours all that crosses his path. In ages past, seafaring folk believed that tidal waves were a sign of the great serpent's wrath, and they sought to appease him with living sacrifices.

Leviathan is the primal of the Sahagin beastmen tribe, and a boss in Final Fantasy XIV. He appears in the Main Scenario, and as a superboss in an optional "extreme" battle. Though he is mentioned a few times throughout the Main Scenario, and his servants play a big role in Limsa Lominsa's opening storyline, Leviathan himself doesn't appear until the events of "Through the Maelstrom".

Leviathan was the patron of the Sahagin, and had a number of pirate followers known as Serpent Reavers in his service. Those enthralled to his will are known as "drowned". The Serpent Reavers resorted to raiding Ul'dahn caravans of crystal shipments—aided by a few corrupt Brass Blades—to supply the Sahagin with sufficient crystals to summon the Lord of the Whorl. He was spotted within the Sapsa Spawning Grounds, and made short work of a diversionary Maelstrom fleet.

Mine is the power to cleanse all things! Naught can withstand the relentless onslaught of my waves!

As he headed to open sea, Admiral Merlwyb Bloefhiswyn realized Leviathan was trying to summon a tidal wave to strike Vylbrand. To confront the primal they'd need a ship outfitted with corrupted crystals to weaken his dominance at sea. Storm Marshall Eynzahr Slafyrsyn noted they'd need at least two ships worth of crystals to approach the primal, and recalled a tale of how the pirate Mistbeard once tethered two ships to carry a large plunder. Using the same tactic, a make-shift barge called the Whorleater was assembled in Moraby Drydocks, enabling a platform so Warriors of Light could confront the dread Leviathan at sea.

Leviathan did not stay down for long, as the Sahagin resummoned him. Faced with an even more powerful Lord of the Whorl, Storm Marshal Slafyrsyn prepared the Whorleater once more—and, once more, the adventurers defeated the primal.

When the party used the spaceship Ragnarok to reach Ultima Thule, the beast tribes summoned benevolent iterations of their primals using the Mothercrystal, with Leviathan being one of the ten summoned. He gave his power to the Ragnarok, allowing it to achieve the propulsion needed for the Scions of the Seventh Dawn and the Warrior of Light to reach their destination.

Leviathan is fought as a boss twice at

The Whorleater: first in the Through the Maelstrom arc of the Main Scenario, then in an optional Extreme battle. He is later encountered again in

The Whorleater (Extreme) is optional, and grants the achievement "I Eat Whorls for Breakfast".

Tidal Barding will enable a player's chocobo companion to resemble the Lord of the Whorl. The barding closely resembles Leviathan's pose in his concept art.

Leviathan appears as an Aqua-elemental card.

Leviathan appears on a Triple Triad card in the version playable via Final Fantasy Portal App.

Leviathan was originally meant to appear as a boss in version 1.0, but was cancelled as the fight was scheduled to release in the aftermath of the 2011 Tōhoku earthquake and tsunami and was considered disrespectful to those affected by the event.[1]

Square Enix's Eorzea Cafe served a dish called "Leviathan's cold blue noodle" whose description translated to: A dish inspired by the Water God, Leviathan. The blue soup reminiscent of a raging Rhotano Sea, and the rich flavors conjured up by the abundant array of fresh seafood will hit you like a Tsunami!

A Realm Reborn concept art, featuring an abandoned idea of Leviathan's barbs being removable via attacks. 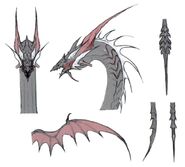