Leviathan is a summon from Final Fantasy XI, being one of the six celestial Avatars, representing the water element. Leviathan was made available as an unlockable summon spell for Summoners during the Rise of the Zilart expansion.

Leviathan was a great sea serpent who used to terrorize the Gugru Sea, in protest of the development of sea commerce. All attempts to defeat him failed, until a war hero named Veydal, who lived in an island kingdom in the middle of the Gugru Sea, volunteered to resolve the situation. He wanted to apologize to Leviathan and try to discuss with him. However, his first mate was too eager to fight and attacked the sea serpent before the order was given, which caused Leviathan to rampage.

Forced to defend his men, Veydal offered his life to Leviathan in return for theirs. The rest of his crew fled, including the first mate. Veydal was last seen falling into the sea in fierce combat with the serpent. Upon returning home, Veydal's first mate claimed the victory as his own. However, the next day, Leviathan's body washed ashore, with Veydal's sword planted in his skull. The serpent wished to honor the memory of the brave warrior and show the truth to his kinsmen, in a dying effort.

Altana, moved by Leviathan's gesture and Veydal's courage, called them both to the heavens. She transformed Leviathan into the Celestial Avatar of Water. Veydal is the name of the brightest, dark-blue colored star of the Leviathan constellation.

When summoned, Leviathan will join the Summoner's party, having its own HP, MP, and TP stats for the player to monitor.

Leviathan is resistant to water and fire-elemental based attacks and enfeebling effects, but has lower resistance to lightning-elemental attacks and debuffs. When a Summoner uses the Avatar's Favor ability, Leviathan will perform an ability that increases the magic accuracy of all party members within range of the summon.

He retains his trademark move, Tidal Wave as his Astral Flow ability.

Leviathan appears as a water-elemental card. 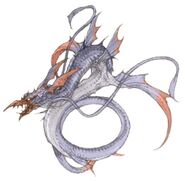