Ruins of the Water God

Leviathan is an Esper in Final Fantasy Brave Exvius. The lord of Lake Dorr, she serves as the patron deity of Olderion where the citizens worship her as the Water God, as she helps protect the land from monsters.

Unlike other espers, she is featured in the main scenario quite prominently due to her involvement with the bloodline of the Wardens of the Waters, to which Nichol belongs.

Although Leviathan's gender is understood to be male for a majority of the story, it is revealed that of its own volition decided to adopt a female identity towards her worshippers taking on a maternal role for better communication.

Leviathan's appearance is rather unchanged from her typical design, being a enormous, blueish, serpentine creature, featuring wing-like fins and long hair.

Leviathan is said to be a kind esper who is fiercely protective of people. She is described as wise and benevolent, being quite gracious and receptive of humans. Unlike other espers who prefer to stay away from human affairs, Leviathan enjoys a healthy relationship with her followers which has spawned centuries of convivence. She is revered as gentle, being a peaceful creature known for never attacking travelers.

Hailing from the world of Paladia, Leviathan resided in the land of Gungan and a temple was made to honor her, back then already known as the water god. When the civil war between Aldore and Hess broke out 700 years ago, Leviathan opted not to participate in the conflict due to her gentle nature. Yet the emperor of Aldore regarded Leviathan as a threat and banished her, as he had done with his own military commanders and army along with those of Hess, to another world called Lapis.

Leviathan was thus sent to the land of Olderion where she gave its waters the magic property to repel monsters as long as they were kept clean. One of the exiled Paladians, Folka, was witness to this phenomena during her investigation of the continent but did not dare to disturb the esper.

Nonetheless, generations of Water Priestess would serve him, along with Wardens of the Waters who would devote themselves to more militarian duties.

While normally Leviathan does not wander far from her lake, during Rain, Lasswell and Fina's seatrip from Kolobos Isle to Dirnado, Leviathan attacks their ship causing them to end up washed up to the shores of Maranda Coast.

After the party makes their way to Olderion and into the Aquapolis, a series of monster attacks harrassing the citadel alerts them that something is wrong. Luka, the current water priestess in charge of purifying the waters that protect the citadel, reveals that her ship was attacked by Leviathan and decides to make a trip to see what has happened to the otherwise-peaceful esper.

The party accompanies Luka and her brother Nichol to Lake Dorr, where they are ambushed by Veritas of the Waters. While they fend her attack off, she reveals that had injured Leviathan with the Sacred Ring of Paladia, whose blood is the cause of the water's pollution, in order to bait the Water Priestess and kill her—all so she can gain access to the Water Crystal and destroy it. Held under Waterlord's thrall, Leviathan attacks and almost kills the party, until Luka's prayers reach her, and Leviathan attack Waterlord instead and Waterlord is forced to flee. Afterwards, Luka descends along with Leviathan to the bottom of the lake in order to heal the esper's wounds and to purify the waters that protect the Aquapolis, even though it may take her years to do so. As she does so, Luka gifts Fina some power to allow them entry to the Water Shrine.

At the end of the season, Luka resurfaces hinting that Leviathan is fine again. This expanded upon in Nichol's short story "A New Life".

After Nichol departs in a journey to find Rain in Paladia, Luka prays to the Water God in order to find the motivations behind her brother's departure while praying for his safety. Leviathan tells her the reason and heeding her plea, she uses their connection as siblings and her own strength to travel between worlds returning to her original shrine. Leviathan is found by the party, however the travel injured her so her powers were unstable, making her unable to speak normally and requiring to use Nichol as her medium.

The Water God reveals she wants to help them in their journey and challenges them to a battle. The party manages to best him and he joins them deeming their cause as worthy. Nichol then requests to know about his sister and the Esper reveals to him that Luka is fine and her prayers brought him to Nichol. He and the party leave satisfied knowing they can meet with Luka again.

In order to obtain Leviathan, the player must talk to a NPC in Natura Capital Naturia who tells Lasswell about the Ruins of the Water God and that strange things have been happening lately (such as wounds healing after drinking water near the ruins, and a sudden flooding). The cutscene will unlock the dungeon after the player returns to the world map.

Unlike other esper dungeons, the Ruins are a fully explorable temple with a minor puzzle.

Leviathan's evocation attack is Tsunami, which deals Water-elemental magic damage to all enemies. Depending on her rarity, its animation and damage modifier changes: it does (280x) at 1★, (380x) at 2★, and (400x) at 3★.

Her long animation frames and high modifier make for a great finisher attack (i.e. timing the attack to hit at the end of a chain for increased damage) when coupled with a 'Summoner' unit, like Garnet, Pure Summoner Rydia, Eiko or Citra, whose EVO MAG passives or equipment boost Leviathan's damage output. Leviathan's evocation damage becomes even greater with Maritime Strategist Nichol's Super Trust Master reward The Divine Art of War, which boosts Leviathan's evoke damage by 75%.

Leviathan's primary stats are HP, MP, ATK and MAG, and is thus recommended to equip her to Magic and Physical Damage units. Her stats (without choosing nodes in her grid), along with the base stat points she grants when equipped by a unit, are:

Leviathan is faced multiple times. She first appears as a mandatory boss fight in the main scenario, where she is a rather difficult foe for players who have not done any significant grinding and just play through the story. She attacks with Blizzaga and Waterga, is able to buff her defensive stats, and at times she uses her signature Tsunami. Leviathan also appears as enemy in the story event Priestess of the Crystalline Waters.

In order to obtain Leviathan, she must be faced in an esper battle in Ruins of the Water God. At 1★, she is still mostly like her main story version: her repertoire of attacks consists of Water and Ice-elemental third-tier Black Magic spells, along with her Tsunami attack, and a self-boost to her own stats. But as the player evolves her, battling her becomes drastically more difficult.

Her 2★ battle, she is a formidable foe almost on par with Bahamut himself. Leviathan has eight million HP and can attack many times per turn, her actions dictated by whether she uses Protect or Haste. Along with her strong physical attacks, she can inflict the Petrify ailment and reduce the DEF stat of a single unit, when using Haste. If using Protect, she casts Waterga and Blizzaga, as well as Flood after casting the former 5 times. She can greatly self-boost her MAG stat with 'Surge, raging waters' and may use Ferocious Current to reduce the party's resistance to Water by 100%, followed by her signature Tsunami. Below 60% HP, every turn she has chance to cast Sealing Foam (which may inflict Stop on the party) and follows the next turn with Bubbles of Rage, a powerful attack that is most likely guaranteed to kill its target. 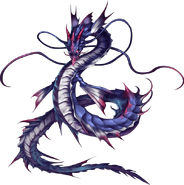 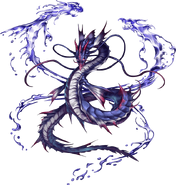 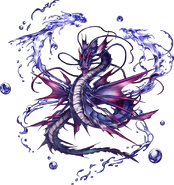 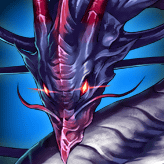 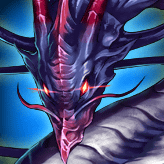 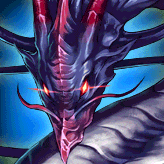 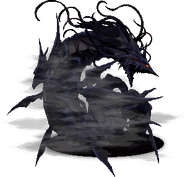 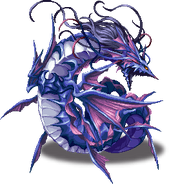