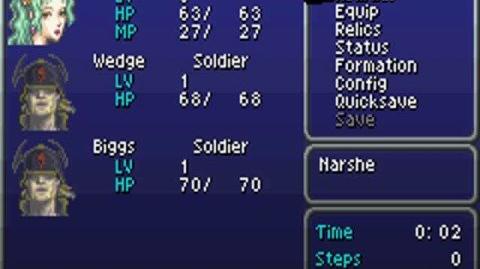 The level reset glitch is a glitch exclusive to the US and European versions of the Advance remake of Final Fantasy VI. It involves resetting a character's level in a current save file, though the character will retain all stats, with 999 MP, increased HP, and spells/abilities learned in the current game. For instance, a player can reset a Level 99 Terra in the World of Ruin back to Level 3 via this glitch.

To perform the glitch, the player must save and Quick Save their game, then return to the title screen and start a New Game, then continue until they have their desired character join the party. As the player cannot save the game on the new file at any point, it is best done on an emulator with save states, or with early characters, such as Terra and Locke.

Once the player has had a character join their party, they must get a Game Over, which will send them back to the last time they saved, with the joined characters at the level they were when the Game Over occurred. This allows the player to effectively maximize any character's stats.

In the mobile version, trying to execute this glitch will send the player back to the title screen. The Japanese release of the Advance version has the same behavior, but the US and European releases have this bug. There is a bugfix patch that players can use to fix it on those releases.