KOs all enemies whose LEVELs are multiples of 5.

Level 5 Death (レベル５デス, Reberu 5 Desu?), Lv.5 Death and L5 Doom, is a recurring Blue Magic spell in the Final Fantasy series. It instantly kills all enemies whose level is a multiple of 5 (ending in 5 or 0). One difficulty in obtaining this spell is that the learner must not die from the spell, which may pose problems for players who have an even-leveled party. Depending on the game, Level 5 Death may or may not bypass immunity to "death".

Level 5 Death is used by Blue Mages. It ignores resistance to Death, restores undead to full HP, and can be learned from Page 64, Level Checker, Azulmagia, Executor, Enuo, and Level Tricker.

It costs 22 MP to cast. It can be learned if the character is a Blue Mage and is successfully hit by the spell, or is using the Learning ability. In the GBA and later versions, Level 5 Death cannot be obtained if the learner, who has taken the hit, finishes the battle without being revived; they must die to the spell (meaning they need to be a level that is a multiple of 5).

The player can also use this ability by catching and releasing an Executor.

Casts Death on enemies whose levels are divisible by 5.

Lv.5 Death (also called L5 Doom) is a Lore learned from the Apocrypha, Dark Force, Death Machine, Deathgaze, Daedalus, Dueller, Devil, and Trapper. Strago can also learn the spell if either Setzer or Gogo use Joker's Death through the Slot command. It costs 22 MP to cast, doesn't check for Stamina, and doesn't restore undead. It is unblockable.

L5 Death can be learned as an Enemy Skill from Parasite. The player must use Manipulate to learn it. The spell is learned as long as it hits a character with the Enemy Skill Materia, no matter if it succeeds or not. It costs 22 MP to cast and kills all targets with a level that is multiple of five.

Because the party can only learn L5 Death in the final dungeon, all but one of the viable targets for it are located in previous areas that are still visitable, or the Battle Square. As such, most of the vulnerable enemies are very weak and able to be killed with just about any attack instantly.

LV5 Death is Omega Weapon's opening attack. This is the only instance of the attack being used in that battle. The only other enemy to use this attack is the Torama. Quistis has a similar Blue Magic skill, Lv? Death.

LV5 Death is notable for being able to instantly wipe out a max level (100) party that has no Death resistance. Due to the ease of reaching level 100 with the level-scaled difficulty, this makes it a devastating attack late in the game.

Quina can learn LV5 Death as a Blue Magic spell by eating Stroper, Dracozombie, or Whale Zombie. It costs 20 MP to cast. It can't be reflected and works with Return Magic. It is also Soulcage's opening attack and used by Ozma when there is a party member susceptible to it, as well as Armodullahan if it catches up with the party in the Fossil Roo.

KO's units with levels divisible by 5.

LV 5 Death is an enemy ability used by Jawbreakers. It is usable through the Morpher job when one of the Jawbreakers with the ability is captured in the Monster Bank. It costs 24 MP to cast and is Dark-elemental.

Level 5 Death is used by Deathgaze when summoned, and it causes a Bravery Break if the opponent's current Bravery is a multiple of 5.

Level 5 Death is used by Deathgaze and operates by breaking the opponent's Bravery if it is a multiple of 5. It can be purchased from select Moogle Shops for 40 KP.

The Deathgaze card can use the Level 5 Death ability. For the discard of a Deathgaze card, it Breaks all the opponent's Characters with costs of 5 or 10. The ability can only be used when Deathgaze is a Forward. 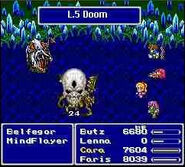 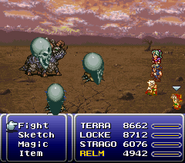