Hits targets with levels that are multiples of 3.

Level 3 Flare (レベル３フレア, Reberu 3 Furea?), also known as L3 Flare, is a recurring enemy ability in the series. It casts Flare on targets whose level are a multiple of 3.

Level 3 Flare is a Blue Magic spell that casts the powerful non-elemental spell Flare on all enemies whose level is a multiple of 3, at the cost of 18 MP. A Blue Mage can learn the spell from Exdeath, Red Dragon, Archeosaur, Level Checker, and Shinryu. The player may utilize this ability by catching and releasing a Dechirer or Level Checker.

Level 3 Flare is an enemy ability used by the Allemagne. It is a powerful spell, that may cause enough damage to defeat the party in one hit, but is only used as a counter to magic attacks. 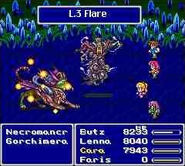