Casts Confuse on enemies whose levels are divisible by 3.

Level 3 Confuse (レベル３コンフュ, Reberu 3 Konfuyu?), also known as Lv.3 Confuse and L3 Muddle in previous releases, is a recurring ability in the series. It typically inflicts Confusion to all targets in the chosen party whose levels are a multiple of 3.

Level 3 Confuse is a Lore spell that confuses all enemies whose level is a multiple of three. It can be learned from Trapper, Apocrypha, Devil, Dante, and Dark Force. It costs 28 MP to cast and its unblockable.

There is a total of 53 enemies that can be affected by Level 3 Confuse: 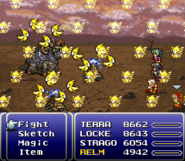