Inflicts old on all enemies with levels divisible by 2

Hits targets with levels that are multiples of 2.

Level 2 Old, also known as L.2 Old, is a Blue Magic spell in Final Fantasy V. It inflicts the status ailment old on all enemies whose level is divisible by 2. Old causes the targets' stats to deteriorate over time, weakening them. The spell can bypass old immunity. It costs 11 MP to cast.

Level 2 Old can only be learned by being hit by the ability. This means the learner must have a level multiple of 2.

The ability can first be learned by from Level Tricker in Barrier Tower, fought towards the top of the construct. This can be done by using the Mix ability Dragon Defense (Phoenix Down+Dragon Fang) to cast Reflect on the enemy (as the Reflect spell is not available yet), using Control on the dragon, and then controlling it to cast Level 2 Old on itself, which will then bounce onto a randomly targeted party member who may learn the spell.

It can also be learned from the Magic Dragon, Executor, and Shinryu.

Level 2 Old can be potent for its ability to bypass immunity. This makes it useful against enemies that it would otherwise not work on, such as the first fight with Exdeath. Level 2 Old can also hit multiple enemies at once.

In comparison to the Old spell, it has slightly over double the MP cost. However, Old cannot bypass immunity or hit multiple enemies, making Level 2 Old the slightly superior spell against enemies vulnerable to it. Libra or Scan can be used to confirm an enemy's level. Dark Spark can be used to manipulate enemy levels as well.

When an enemy has old status, level-based abilities like Level 3 Flare will miss as old is deteriorating the target's stats. Afflicted party members see their stats gradually deteriorate to 1 while their level remains the same, but monsters have their level and agility gradually sink to 1. Old lasts until cured or until the end of battle.

The following enemies are susceptible, but the player cannot use Level 2 Old on them in a normal playthrough: 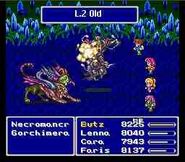