Casts Holy on enemies whose levels are divisible by ?.

Level ? Holy (レベル？ホーリー, Reberu ? Hōrī?), also known as Lv.? Holy and LV?D Holy, is a recurring spell in the series. It consists of casting Holy to all enemies depending on their level.

Lv.? Holy (also known as L? Pearl) is a Lore learned by Strago Magus that deals Holy damage to all enemies whose level is a multiple of the last digit of the party's current gil. This means if the enemy is level 44, and the party's gil amount ended with the digit 2, it would work, but if it ended with 3, it would not.

If the final digit is 1 or 0 (although there is no logical way to divide by 0), it will hit all enemies, guaranteed. It costs 50 MP to cast and has a power of 120. It can be learned from Alluring Rider, Dark Force, InnoSent, and Red Dragon.

Level ? Holy is a Blood Pact: Rage of Cait Sith as well as an enemy ability used by Cait Sith Ceithir and Cait Sith when the latter is fought as a prime Avatar (which is necessary to obtain its summoning magic). A six-sided die is rolled; the result both determines what number the targets' level must be divisible by in order to be affected, as well as acting as a multiplier to the damage. Thus, a one is the lowest damage but affects all targets in range, while a six is the highest damage but only targets of level 6, 12, 18, etc. will be affected, the fewest possible target levels of any result. Damage dealt is light-based magical damage.

When used by players as a blood pact, Level ? Holy requires a Summoner job level of 75 or greater and costs 235 MP.

There is also a closely related enemy ability also translated as Level ? Holy, but its Japanese name (HP？ホーリー, HP ? Hōrī?) actually makes clear that it is based on (max) HP instead of level. This is because it is used by Cait Sith Prime in the high-level version of the prime avatar fight where all players would be expected to have a base level of 99. Therefore, if it were level-based players would only be struck on a roll of 1 or 3 (that is, only one third of the time) and would never achieve its maximum damage. As it is, it can hit players for over 10,000 damage if they are unlucky, which is more than any player character actually has. Therefore, players use means of mitigating or preventing extreme damage attacks such as the Ninjutsu Migawari, the Bard Song Sentinel's Scherzo, or Titan's Blood Pact: Ward Earthen Armor.

Holy damage to units with same one's digit in level and days.

The Titania enemy knows the spell LV?D Holy, which deals harsh Holy damage to all units with a level equal to the current day. It costs 32 MP to cast, has a Magic Power of 65, and is susceptible to Absorb MP.

Lv.? Holy is an enemy ability exclusive to the Banshee, which deals Holy elemental damage to all units who share the first digit of the caster's level. 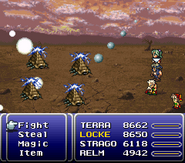 This gallery is incomplete and requires Final Fantasy XI and Final Fantasy Tactics A2: Grimoire of the Rift added. You can help the Final Fantasy Wiki by uploading images.
Blue Magic
Enemy abilities
Italiano
Community content is available under CC-BY-SA unless otherwise noted.