The Leuda Caravan are the Crystal Caravanners from Leuda whose group consists of only a Selkie couple in Final Fantasy Crystal Chronicles.

While not really considered a Crystal Caravan, this Selkie couple from Leuda is the closest thing they have to a Crystal Caravan. They travel on foot, with Dah Yis carrying the Crystal Chalice around.

When the Tipa Caravanners first run into the couple, they have yet to collect a drop of Myrrh. They explain that they are having too much fun adventuring to keep up with their quest to collect Myrrh. Despite their habit of doing this, the couple always collect the tree drops they need. The Tipa Caravan encounters them later again, but this time the couple are unhappy. They are seen arguing over inane problems and will begin to sell random material at cheap prices.

If the player refuse to buy from the couple, they will blame the party if Leuda ends up in ruins. Later on when the party runs into them again, they are seen relaxing as they have completed collecting drops of Myrrh. If they are paid 100 gil, a cutscene will be shown of Dah Yis playing music as Hana Kohl dances. 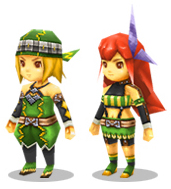 In Ring of Fates, the appearance of the Bandit Clothes/Crook's Clothes and Bandit Bandana/Crook's Kerchief outfits for the Selkies look very similar to Dah Yis and Hana Kohl's outfits.