The Lethe River, also known as Lete River, is a river in Final Fantasy VI that flows through the World of Balance. It starts in the Sabre Mountains and flows through the mountains and has two discharges: one near the port city of Nikeah and the other is near Gau's father's house. The river runs into a lake close to Narshe. It passes by the Returner Hideout, and the Returners built rafts to escape in an emergency. Ultros the octopus spends some time in this river.

When news reached the Returners that the Gestahlian Empire invaded South Figaro, Terra, Edgar, Sabin, and Banon escaped on a raft down the river. They approached Narshe, but the octopus Ultros intercepted and battled them. Ultros stuck his tentacle to Terra's leg and Sabin leapt into the water to fight himoff, but was washed down another tributary of the river. Terra, Edgar, and Banon continued on to Narshe, while Sabin washed ashore at a house in the eastern region.

The river, along with most of the Sabre Mountains, was gone in the World of Ruin, seemingly having sunk beneath the ocean.

One of the save areas on the river (top), and the party traversing the river (bottom).

The Lethe River has two points at which the player party has to choose a path. At the first spot, the direction chosen does not matter, all paths converge, and the river eventually stops at a cave with a save points. At the second point, going up loops back to the fork, and going left takes the party to another cave with another save point. After exiting this cave, the raft drops down a waterfall and the battle with Ultros occurs shortly beyond this point. In the Pixel Remaster port, a pot of healing is placed at the second save point.

During Terra, Edgar, and Banon's part of the Three Scenarios, they journey down the river further, but there are no forks and they eventually arrive on the world map.

When revisiting the river later, the river exits near the crazy old man's house where Sabin began his scenario.

The part of the river where going up loops back to the fork can be exploited to level grind endlessly. By setting the controller to "Memory", the cursor will remain at the last spot it was in each battle. The player can then set Banon to continuously use Pray, and then just tap

to continuously ride the loop and get into battles—the party will attack and Banon will sustain their HP, creating an endless cycle. If using a controller with turbo function, the player can leave the game running for hours and return later.

While this can seem useful, stats only grow by esper level-up bonuses. It is more advantageous in the long run to keep the party's levels low until they acquire espers.

Mog can learn Water Harmony by battling on a water terrain. If the player recruits Mog in the World of Balance, they can go down the Lethe River with him to let Mog learn the dance. However, it is quicker to teach Mog the dance by going through the Serpent Trench from the Veldt to Nikeah, as the player can ride a chocobo from Nikeah all the way to Baren Falls that empties on the Veldt. If the player chooses to go down Lethe River, they would need to travel to Nikeah from the old man's cabin on foot, and then travel through Mt. Kolts to get back to the Returners' hideout.

The player can use the river to return to the Veldt and learn more Rages for Gau before they have access to the Blackjack.

There is no music for Lethe River. Instead there is the ambient sound of rushing water.

Lethe River was featured as the only dungeon for the Challenge Event Monster in the Lethe?. Later, A Fateful Coin Toss briefly returned to the location on Sabin's path. 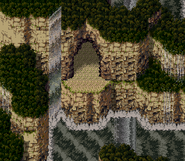 Save point in the cave (defunct mobile/Steam).

The party meeting with Ultros (GBA).

The party encounters Ultros in the Lethe River (defunct mobile/Steam).

[view · edit · purge]In Greek mythology, Lethe was one of five rivers in the underworld, as well as the name of a spirit associated with the river. The spirit Lethe was the spirit of forgetfulness and oblivion, and drinking the water of the river caused forgetfulness. The Lethe River was portrayed in the Divine Comedy as a river in Purgatory, which Dante drank from to wipe memories of sin from his mind, preparing him to enter Heaven.

Lethe is also the Greek goddess of Oblivion.