Final Fantasy Wiki
Register
Don't have an account?
Sign In
Advertisement
in: Characters in Final Fantasy IV: The After Years, Sages
English

This girl's no good as an Epopt, that's for sure. But as my partner, she passes with flying colors!

Leonora is a playable character in Final Fantasy IV: The After Years. She is a talented Epopt trainee determined to join the Epopts of Troia. Leonora knows White Magic from her Epopt training and learns Black Magic from Palom through training in the Tower of Trials. 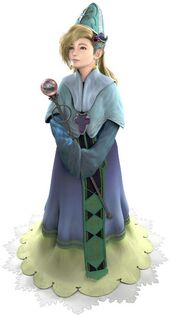 Leonora is a young, blonde girl with green eyes. She wears a light blue priest's mitre and blue and green robes with lace trim and a green, yellow and blue pattern down the front. The sleeves of the robe are loose and hang down to cover her hands, and the bottom of the robes drags on the ground. In early artwork Leonora's dress was shorter, just long enough to brush the ground instead of dragging, and without lace trim. She wields a long staff topped with a circular design and a large red orb. In early artworks the orb is orange and smaller.

At the start of Palom's tale, Leonora is introduced as a humble, shy and quiet young lady who has great aspirations as an Epopt. She rarely asserts herself to Palom, unless he puts his life in jeopardy or insults the Epopts of Troia. Under Palom's guidance, Leonora gains more confidence and later takes an interest in becoming a Sage like Palom.

She eventually admits to liking Palom, and ignores his wishes to save his life from one of the Maenads, demonstrating courage and a strong sense of concern for her partner. Palom at one point compares Leonora to his sister, remarking "...Is there a written rule somewhere that says all White Mages have to be so stubborn?" He has faith in Leonora and a certain, mutual fondness for her, saying she passes with flying colors as his partner.

Like Biggs and Wedge, Leonora was originally unnamed in Final Fantasy IV. She appears in the ending as a little girl in Mysidia, listening to Palom brag to her about his adventures until Porom arrives to take him to the Elder.

When one of Troia's eight Epopts falls ill, they seek a replacement. Palom is sent from Mysidia to train Leonora, whom the Epopts chose as the new guardian. They train at the Tower of Trials where Leonora learns some Black Magic under Palom's guidance. Palom teases her and makes rude remarks about the Epopts, which he apologizes for after Leonora says Troia has been kind to her.

They finish her training and return to Troia, where they learn the Red Wings have begun to steal the Crystals again. Palom worries and suggests he and Leonora take Troia's Earth Crystal somewhere safe before the Red Wings arrive. Leonora leads Palom with the Earth Crystal through an underground waterway in Troia's castle. As they make it out of the waterway, they continue to the Chocobo's forest north of Troia, and mount a black chocobo.

They fly to the Lodestone Cavern where the strong magnetic field protects them from the Red Wings, who are made to discard their metal weapons. Leonora and Palom take the Earth Crystal to the chamber where the Dark Elf's spirit resides. It attacks them and assumes a dragon form, which resists their magic. The Eidolon Shiva destroys the Dark Elf, and the Mysterious Girl enters threatening Palom's and Leonora's lives if they do not relinquish the Earth Crystal.

Palom teleports Leonora away from the chamber before casting Break on himself and the Earth Crystal, preventing the Mysterious Girl from taking it. Leonora refuses to leave Palom and returns to save him. After casting Esuna on him, Leonora reveals she was the same girl he was flirting with during the Final Fantasy IV ending. Palom tells the Mysterious Girl that even though Leonora is not the best Epopt, she is perfect as his partner. They band together to fight her, but are defeated before losing possession of the Earth Crystal.

When the True Moon moves closer into the Earth, Rydia, Luca, Golbez, and Edge go to the Lodestone Cavern and find it has been frozen by Shiva. They reach the Crystal Chamber and find Palom with Leonora, who have been frozen in ice. After the party stops Shiva, Palom and Leonora recover on the Falcon.

Within the True Moon, Leonora speaks briefly with Palom's sister Porom, who reveals Palom's faith in her as a student, which surprises Leonora but makes her happy. Luca confronts her over her relationship with Palom, and while she is embarrassed by the question, Leonora admits she does like him. Palom, eavesdropping, remarks that women can be dangerous.

After the Creator is defeated, Leonora gives up her position as the new Epopt, deciding she wants to spend more time with Palom to become a Sage.

Leonora's versatility comes at the cost of her having the third lowest HP growth of the party—alongside Calca and Brina, she is one of three characters with less than 4,000 HP at Level 99. Her MP is good, though not as high as other mages', and her Stamina and Speed are low. She focuses more on her White Magic, and has Spirit on par with Rosa and Porom, but lower Intelligence than Golbez, Rydia and Palom.

Leonora is similar to a Sage, able to learn both White and Black Magic. In the Depths, it is possible to teach Dualcast to Palom, Porom, or Leonora, but only one of the three can learn it. Because she knows both types of magic, Leonora has the most variety with Dualcast.

Being primarily a white mage by training, Leonora can equip similar equipment to Rosa and Porom, with the addition of rods to reflect her ability to cast black magic as well.

She joins in Palom's Tale with a Staff, a Feathered Cap, a Gaia Gear and an Iron Armlet.

Leonora in the promotional artwork for Palom's Tale.

Leonora with the cast of The After Years.

Palom and Leonora in the opening FMV.

Palom, Porom and Leonora in the opening FMV.

Leonora with Palom and Porom in The After Years (Wii).

Leonora in the ending of Final Fantasy IV (PSP).

[view · edit · purge]Leonora is a name of Greek origin that means "light". Similarly, it is the Italian short form of the name 'Eleonora', which means "shining light".