Final Fantasy Wiki
Register
Don't have an account?
Sign In
Advertisement
in: Final Fantasy: The Spirits Within 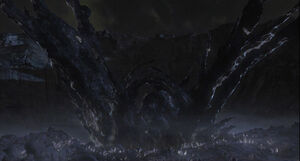 The Leonid Meteor (レオニド隕石, Reonido Inseki?) in Final Fantasy: The Spirits Within is the cause of the worldwide Phantom invasion on Earth.

Regarded as the nest of the Phantoms, the largest chunk landed on a region in the the Caspian Mountains and has since spawned Phantoms that threaten the living things on Earth. Other Leonid meteorites also fell on the Arizona Desert and spawned the Phantoms in the American continent.

The meteorite has been subjected to many of the United States Military Force (USMF)'s attempt to stop the Phantom invasion. The recent bombardment wiped out the Phantoms around the meteorite, but sooner or later, dormant Phantoms would emerge and continue their assault.

This led to the creation of the Zeus Cannon to destroy the Phantoms' nest. While the first shot destroys the meteorite, it exposes the aliens' Gaia and spawns more Phantoms into the area. The alien Gaia is destroyed thanks to Dr. Sid's efforts.

The Leonid Meteor is named after the Leonids meteor shower that appear every year during November.