Leon is Maria's brother and Firion's adoptive brother and best friend. During the invasion of Fynn by the empire, he escapes with Maria, Firion and Guy, but becomes lost when they are set upon by a party of black knights on the forest.

Leon, or Leonhart, is a playable character in Final Fantasy II. He is an ally but he also serves as the secondary antagonist as the Emperor's Dark Knight. He is Maria's brother. Leon is the first Dark Knight in the Final Fantasy series, although it would take until Final Fantasy IV for the signature abilities and fighting style of Dark Knights to be introduced.

Leon is a young man with olive skin, purple eyes, and spiked dark purple hair that is swept back. In his normal appearance, he carries a curved sword and wears a dark purple suit of armor trimmed with bronze, with spiked pauldrons and bronze knee pads. He also wears leather boots and has a large red jewel on his belt. As the Emperor's Dark Knight, he wears an ornate set of black armor trimmed with gold, a helmet with curved gold horns, and a red cape. Leon's NES sprite is a modification of the Warrior sprite from the original Final Fantasy, colored blue and bronze instead and having a slightly different blue hairstyle, while his field sprite shows him with blue armor and red hair.

Leon's personality before becoming the Dark Knight is not elaborated on, but he seems to have cared for his sister Maria deeply. As the Dark Knight, he is power-hungry and authoritative, often rude and harsh to Firion and his party. His dreams end up being dashed and he comes to regret his decisions, hoping that someday he will be forgiven.

In Bafsk, the citizens under his control appear mute and afterwards can't remember what it was like when he was in control, so he may have used dark powers like mind control.

Leon, Guy, Maria, and Firion were among the people forced to flee Fynn when it fell. Maria ended up in danger of being killed by Imperial Soldiers when she tripped, but Leon came to her defense and held the soldiers off while Firion got her to safety. He later reconvened with the group, ultimately watching Fynn from afar as it burned with the others.

Leon is separated from his allies, including his sister, during an attack by Palamecian Knights. He becomes the Emperor's Dark Knight and fights against his former allies. It is never stated why Leon joins forces with the empire. At one time he leads the building of Dreadnought but is replaced by Borghen and forced to work behind the scenes to put on the finishing touches.

When Firion and his party go to Bafsk to stop the construction of the Dreadnought, Leon informs them they are too late and the Dreadnought is complete, also making clear that the claim that he left for Palamecia and had Borghen do the finishing touches was, in fact, disinformation. When Firion and the others drop the Sunfire in the engine, Leon comes to see what happened and Maria recognizes his voice. He later appears to capture Firion and the others who try to rescue Hilda. After the Emperor is slain aboard the Cyclone, Leon attempts to crown himself Emperor, but is forced to flee with Firion and Maria after the Emperor returns from the dead in demonic form.

Leon joins forces with Firion, Maria, and Guy to defeat the Emperor at the Pandaemonium. After the Dark Emperor's death, Leon states that "too much has gone on between us" (referring to Firion's party). He implies he and Firion will meet again one day and leaves. Firion comments that when he is ready to return, Leon will be welcomed with open arms.

Since Leon is removed from the party following the initial battle, it is impossible to see his equipped armor or stats other than his starting 30 HP and 5 MP, but Leon's base stats and equipment in this initial battle are copied from Firion's. As such, he wields a Broadsword and a Buckler. These can be unequipped from him in the remake versions, and they will not be lost after the battle.

Leon's stats are higher than most of the characters when the player regains him, unless the player has done a lot of grinding. Leon starts off with no spells and very little MP, but has high Intelligence so he can be effective with Black Magic. His Stamina and Magic are high so his HP and MP will grow quickly. He has high Strength and is proficient to some degree with all weapon types. His initial equipment is a Flame Sword and a Poison Axe as weapons, and a set of diamond equipment for armor. Leon's ultimate weapon in the Arcane Labyrinth is the Longinus, making spears the weapon to focus him in if the player wishes to use it well.

It is up to the player to decide what kind of warrior Leon becomes. In the battle with the Emperor shown in the Soul of Rebirth cutscene before the final battle, Leon knows Cure, but as with any spell, the player may teach it to whomever they wish. Due to how stat growth works, any of Leon's lower stat can be made up with the proper investment.

Leon has made appearances in the following games in the Final Fantasy series:

Two characters who seem to have served as the basis for Leon in the final game appeared in the earliest drafts of Final Fantasy II - Leon, a famous knight part of Bamberg, and Rigel the Dark Knight. [2] After the initial idea for the plot was revamped entirely, a new character named Leon was written as one of four protagonists of the game.

In the proceeding drafts, Leon's character became more similar to the final product, being brainwashed by the Emperor after the game's opening battle and becomes the Dark Knight. [3] These new elements would make Leon the first character in the series to serve as both a party member and an antagonist, while also being one of the first antagonists in the series that is related to a playable character.

Leon was meant to appear during the original version of the Wyvern egg portion of the story, demanding for the creature and the fallen Dragoon's pendant. The party would then engage Leon in battle and defeat him, with Leon being forced to retreat. [4] In addition, the scene after the Emperor's return was different from the final version, this original version had Firion chastising Leon for his obsession with power, and warn him that he could become corrupted like the Emperor if he continued down his current path. Listening to Firion's words and encouragement from both Maria and Guy, Leon would reluctantly accept to join in their final fight against the Emperor. [5]

In the first novelization of the game, Final Fantasy II Muma no Meikyū, Leon is said to be nineteen years old. [6] However, this age is never mentioned within later releases of the game or extended guide materials.

References in other titles[]

In Final Fantasy IV, the King of Fabul gives Cecil Harvey the Deathbringer and says a Dark Knight left it there years ago. In the Final Fantasy IV Settei Shiryou Hen guide, the name of this Dark Knight was Leonheart. The guide mentions he lived approximately 100 years before the events of the game, and was said to have renounced the Dark Sword to become a priest, somewhat echoing Cecil's journey to become a Paladin a century later. His sword remained a centerpiece in the Temple of Fabul until it was given to Cecil by the king.[7]

Although Leon doesn't appear in Dissidia Final Fantasy, he as well as his brainwashing by the Palamecian Empire, are referred to when fighting the Emperor as Cecil, where the Emperor says "Ought you not be on our side?"

Leon's vocal sounds in the FMV opening were provided by Takayuki Yamaguchi, who would later voice Brother, Clasko, Keepa, and Wantz in Final Fantasy X and Final Fantasy X-2. 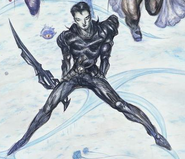 Alternate artwork of Leon for Dawn of Souls.

[view · edit · purge]Leon is a name of Greek origin. The Greek λέων (leōn), meaning "lion," has spawned the Latin leo, French lion, Irish leon and Spanish león. During the Christian era Leon was merged with the Latin cognate Leo, with the result that the two forms are used interchangeably.

[view · edit · purge]Lion Heart means to possess or display courage, being able to face and deal with danger or fear without flinching.