You're a human being before you're a soldier.

General Leo Cristophe is a temporary playable character in Final Fantasy VI. He is the top general of the Gestahlian Empire and one of Emperor Gestahl's most trusted men. Leo is a man of honor and morals and prefers to settle conflicts with diplomacy rather than bloodshed, attitudes that make him respected on both sides of the battle and particularly loathed by Kefka.

Leo wears a green military coat with yellow trim and pauldrons and a high collar. The coat is closed from the left side and held with a yellow and orange belt with a red orb seeming to function as the buckle. He wears matching pants and brown boots, the latter of which are adorned with the same type of red orb as is on his belt. Leo has dark brown eyes and blonde hair cut in a flat top style. Leo's Super NES and Gameboy Advance sprites give him light green trim on his coat and blue pauldrons and boots.

In Leo's Super NES sprite, he has the same skin tone as most other human NPCs, but his portrait and concept art depict him with dark skin. This is likely due to technical limitations of the number of palettes player-characters can draw from and the limited number of colors they have. The 2014 mobile and Steam release, as well as the Pixel Remaster release, give Leo's sprite a darker tone, though not as dark as his portrait. All-spin off titles featuring Leo consistently depict him with dark skin, save for Final Fantasy Record Keeper which reuses Leo's SNES sprite.

Leo's personal weapon is a sword. In Final Fantasy VI he wields the Crystal Sword. His concept art does not give a full view of the sword, only the handle and end of the sheath; what can be made out is that the handle is blue ornamentation and the blade is curved.

Leo is an upstanding, honorable man. Imperial soldiers look up to him as an ideal warrior and are proud to serve under him. Among the Returners, Cyan and Sabin both respect Leo for his integrity even if he is their enemy. Leo refuses to storm Doma Castle, reasoning that even if the Empire would win such a direct attack, they would suffer heavy casualties and he does not want his men to die pointlessly. Though one of his officers informs Leo he is willing to die for the Empire, Leo gently reprimands him by reminding him of his family and that he should act like a human before a soldier.

Leo's code of honor shames him even for inaction; he apologizes to Cyan for not being at Doma to stop Kefka from poisoning the river and killing the castle's citizens, and he tells Terra that he knew she was being used as a biological weapon and did nothing, and for it he considers himself no better than Kefka. He consoles Terra over her hesitations about being able to feel love, and privately tells her he'd like to continue the conversation at a later time. Leo is devoutly loyal to Gestahl and the Empire, obeying orders without question or hesitation, and is polite in all his dealings, even with Kefka. It is only when Kefka tries to destroy the peaceful village of Thamasa that Leo finally turns on Kefka and tries to stop Kefka's atrocities.

Leo is famous in the Empire for refusing a Magitek infusion, instead relying on his swordsmanship to fight, and he is regarded as one of the finest warriors of the Empire. Leo is equipped with a Master's Scroll, allowing him to attack four times a turn at reduced damage. His special ability is Shock, which deals heavy magic damage to all enemies. As Leo did not receive a Magitek infusion, is it unclear how Shock deals magic damage.

General Leo was born in Vector, capital of the Empire, and rose through their ranks to become Gestahl's top general. According to the daughter of a wealthy citizen in South Figaro, he has had dinner with Leo. At some point Leo was offered a magic infusion, but refused.

Leo was sent to the Imperial Camp near Doma Castle to oversee the siege of Doma. After Cyan turned back their latest attack and the Domans fortified their position in the castle, Sabin and Shadow overheard Leo discussing strategy with one of his officers. Though the soldier was willing to take part in an attack on the castle, Leo told him to think of his family and not be quick to throw his life away for nothing, impressing Sabin. Leo received a letter from Gestahl calling him back to Vector, and as Leo made his preparations to return, Kefka immediately began plotting to poison Doma's river to wipe out its people. Leo warned him not to do it but Kefka ignored him and went through with his plan, wiping out the people of Doma except for Cyan.

After the destruction of Vector by espers, the party joined Gestahl for a banquet at the Imperial Palace. Gestahl convinced them he wanted to call a truce and asked for their help in locating the espers for peace talks. The Returners agreed and Gestahl called Leo into the banquet, announcing he would lead the expedition. Leo departed to Albrook to begin make plans for the trip; he hired Shadow in town to aid them, and also recruited Celes, who had rejoined the Empire after siding with the Returners. Leo met with Terra and Locke and told them about their allies, and invited them to stay the night in Albrook's inn before their departure the next day.

The journey by ship to Crescent Island was uneventful. During the trip, Terra came above decks and spoke to Leo about the morality of the Empire and its soldiers, and Terra's hesitations about being able to feel love. Leo confessed he felt he was no better than Kefka for allowing the Empire to use Terra as a biological weapon, and reassured her she would find love someday. He then departed to below decks. The next day as they neared the island, Leo gave orders for Terra, Locke, and Shadow to form one group to search, and he and Celes would form the other. The groups disembarked and split up.

With help from Strago, a citizen of Thamasa, Terra and Locke found the espers and returned to Thamasa. Leo met with Yura, representative of the group, and humbled himself and asked forgiveness for the Empire's crimes. Though the talks were going well, Kefka arrived escorted by troops in Magitek armor and they incapacitated Leo's men and the Returners. Leo demanded an explanation and Kefka revealed he was acting under Gestahl's orders to kill the espers and bring their magicite back to the Emperor. Kefka killed Yura and the espers and seized their magicite, and ordered his troops to burn the village. When Leo protested, Kefka snapped for him to shut up and had one of his escort incapacitate Leo.

Leo recovered and, finally fed up with Kefka's misdeeds, attacked him. Kefka vanished and he called out for Emperor Gestahl. Gestahl appeared and Leo knelt before him, and Gestahl claimed his goal had always been to acquire the magicite and he wanted Leo to take "a very, very long rest". With a laugh Gestahl turned into Kefka; both the "Kefka" Leo had fought, and the Gestahl he had spoken to, were Kefka's illusions. Kefka shoved Leo to the ground and said he would tell Gestahl he had to dispose of a traitor. Kefka then leapt atop Leo and killed him.

The Returners laid Leo to rest in a burial mound on the eastern edge of Thamasa, his sword stuck in his grave.

Leo's stats are all-around high, comparable to the highest-level base stats of the main playable party. He will be the average of the party's current levels +5.

As a temporary party member his equipment is locked. He equips a Crystal Sword, Aegis Shield, Golden Helm, Golden Armor, and the Relics Master's Scroll and Gigas Glove. The effect of the Master's Scroll causes Leo's Attack command to hit four times at half damage.

Leo's special ability is Shock, which deals non-elemental magic damage to all opponents. Shock cannot be reflected or absorbed by Runic, and can be used even if Leo is silenced. At 128 power, Shock is slightly stronger than tier-three magic spells like Firaga and it cannot be blocked.

Because of Leo's powerful equipment and abilities, the sole cinematic battle he is required for against Kefka is very easy: most of his magic attacks will be blocked and do little damage, and Leo can deal well over a thousand damage with his basic attacks. The only other enemy Leo can fight is the Guardian, which is immune to damage and Leo must flee from the battle. 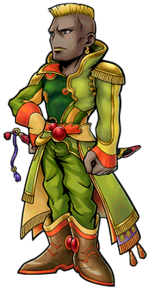 Leo has appeared in several titles in the Final Fantasy series.

In spin-offs, Leo is a heavy physical attacker with skills to defend his allies. As a guest character, Leo did not have a Desperation Attack, but spin-offs treat his Shock ability as his Limit Break or equivalent mechanic. Opera Omnia includes Shock as Leo's EX Skill, Record Keeper gives Leo several Soul Breaks that use the word Shock in them, and Brave Exvius gives Leo three variants of Shock as his Limit Bursts, tiered in power from Shock, Giga Shock, and Ground Shock.

. Record Keeper also has a weapon based on Leo's concept art called the Ultima Sword

. Though they both take their inspiration from Leo's Amano concept art, the two weapons have distinct designs.

In the Dawn of Souls and subsequent remakes of the original Final Fantasy, Leo is one of the automatic names the player can choose for the Warrior job.

Leo was the subject of much rumor and speculation about ways to revive him in the World of Ruin and permanently recruit him into the party. A prominent method for this involved the Dinosaur forest and a thief in the Cave on the Veldt that claimed a "frightful dragon" lived there (a mistranslation of the Japanese script which mentioned large dinosaurs rather than a specific enemy). After killing enough dinosaurs in the forest, players could apparently encounter this dragon as a boss (sometimes said to be called Gold Dragon, a real but entirely different enemy, or the CzarDragon, a dummied enemy) and it would drop a potion that could be used at Leo's grave to revive him.

Using the Airship Glitch, among other exploits, it is possible to use Leo in places outside of Thamasa, but he comes with many limitations, including that he will vanish from the party if the player ever enters the menu to form their party.[3] Leo can only be recruited in the World of Balance, and due to the limitation with the party select screen cannot be brought to the Floating Continent and thus the World of Ruin through normal story progression, however by exploiting another glitch that allows the player to temporarily return to the World of Balance, it is possible to bring him to the World of Ruin by those means.

General Leo's grave in the World of Balance.

General Leo's grave in the World of Ruin.

[view · edit · purge]Leo is Latin for "lion". It is a shortened form of the male given name "Leonardo".

[view · edit · purge]Christophe is the French form of Christopher, a name derived from the Ancient Greek Christóphoros, or "Christ-bearing."

His job class is listed as "General." [view · edit · purge]A general or general officer is an officer of high military rank, usually in the army, and in some nations, the marines/marine corps and the air force.