Lenneth was a light-elemenal Eidolon that appeared in the free-to-play version of Final Fantasy Dimensions II. She is one of the main protagonists from the Valkyrie Profile series of games. Lenneth was introduced as a signet in the game during the Valkyrie Anatomia: The Origin collaboration event.

There were two versions of Lenneth available in the game; one that was obtainable through the game's summon drawing shop, and a second version known as Lenneth F (レナスF, Renasu F?), which could only be obtained by defeating the Loki event boss. Both signets were god-tier light-elemental summons and could be equipped by all party members.

In addition, Aemo, Jornee, and Maina could obtain Lenneth's outfit as a costume to equip.

Similar to other cameo characters, the Lenneth summons and costume were removed from the premium release of Final Fantasy Dimensions II.

Both versions of Lenneth shared the Godly Blessing summon attack, which restored 25% of max HP and MP to all party members. Summoning both Lenneth summons required 2 bars from the Summon Gauge.

The following are the abilities characters could use when equipped with Lenneth depending on her rank:

The following are the abilities characters could use when equipped with Lenneth F depending on her rank: 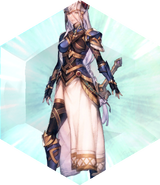 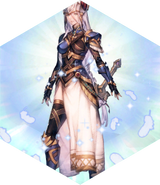 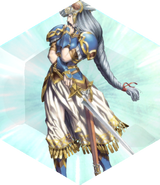 An item that was required to upgrade Lenneth.
Add a photo to this gallery
Final Fantasy Dimensions II
Retrieved from "https://finalfantasy.fandom.com/wiki/Lenneth_(Dimensions_II)?oldid=3246505"
Community content is available under CC-BY-SA unless otherwise noted.