This moment's enough. I don't need anything else. Just knowing how you feel is enough.

Lenne was a popular songstress and summoner from ancient Zanarkand and Shuyin's lover in Final Fantasy X-2. Lenne's love for her partner has persisted through the ages, and inspires present-day Yuna to come up with a solution for a new crisis Spira finds itself in. Though separated by a thousand years, Lenne and Yuna share a bond as summoners whose significant others have departed from this world.

Lenne was a slender young woman with long, straight brown hair and brown eyes. She wore violet lipstick, a blue top with white ruffles extended to her knee on the left side, a short black lace skirt with a blue belt, and knee-high brown boots. She had black ribbons on her upper arms; blue glovelets held on by black straps and a pair of long dangling beaded earrings. Yuna wears this outfit in the Songstress dressphere.

Lenne was a caring and loving person who did not want to see grief and death across Spira. Lenne loved Shuyin, and her intense feelings for him preserved her memories as a sphere. Being a summoner, she possessed some talent and determination for battle, and a desire to fight for her people. She was also talented in singing and songwriting.

Lenne was a summoner and a treasured songstress in ancient Zanarkand. During the Machina War, Lenne was expected to fight on the front lines. Her lover, Shuyin, set out to steal Bevelle's weapon of mass destruction, Vegnagun, to stop the war and save her, but Lenne went after him. Final Fantasy X-2: International + Last Mission Ultimania details that a Zanarkandian spy brought news to Lenne of Shuyin having been sighted, and she intuited that he planned to enter Bevelle.[1] She caught up with him in Vegnagun's chamber, but the Bevelle forces gunned down the couple. Lenne told Shuyin she loved him during her final breath, but he never heard her. Shuyin's soul lived on and grew bitter and hateful for everything the Machina War took from him.

Lenne's memories and feelings present in the pyreflies condensed into a sphere, which Kimahri Ronso finds on Mt. Gagazet a thousand years later. The Gullwings use it as a dressphere, not knowing its true nature as the host of Lenne's spirit. Yuna notices a subtle change in her emotions while wearing the dressphere and appears to connect to Lenne's lingering memories in a way no one else seen wearing the dressphere can. The only other person to notice the link is Maechen, who appears to recognize Lenne in Yuna's gestures when shaking Yuna's hand.

While wearing the dressphere, Yuna dreams of meeting with Tidus in Bevelle Underground and being shot by Bevelle guards. When Yuna falls through the hole in the Djose Temple's Chamber of the Fayth to the Farplane, she meets Shuyin's spirit, who mistakes her as Lenne due to Yuna wearing Lenne's dressphere. During the encounter, Yuna feels a surge of unfamiliar emotions. Lenne's memories later manifest as the song "1000 Words" Yuna performs during her concert on the Thunder Plains. During the show, the Songstress dressphere reacts with Shinra's sphere display, broadcasting Lenne's final memories for the crowd. Lenne's spirit is manifested and sings alongside Yuna (in the original Japanese release, Yuna briefly turns into Lenne instead), and the party discovers Lenne's essence lies dormant inside Yuna's dressphere.

As the party ventures into the Farplane to stop Shuyin, they try to trick him by having Yuna wear Lenne's dressphere and impersonate her. Shuyin sees through the guise and goes berserk. After the party defeats Shuyin in battle, Lenne awakens and emerges from Yuna's dressphere to soothe Shuyin. She tells him to rest and thanks Yuna as they both fade away.

Lenne's theme is "1000 Words", played during Yuna's concert on the Thunder Plains. An orchestrated version plays during the game's end credits.

According to the Final Fantasy X-2: International + Last Mission Ultimania "Four Puzzles" section, the part where Yuna dreams of holding hands with Tidus while escaping Bevelle Underground never happened with Lenne and Shuyin. It is due to her dream melding with Lenne's memories while sleeping wearing the Songstress dressphere. The memories displayed during the 1000 Words concert is the actual course of events.[1]

Koda Kumi provides both speaking and singing for Lenne in the Japanese version. In the English version, Cree Summer does Lenne's speaking voice while Jade Villalon performs her singing. 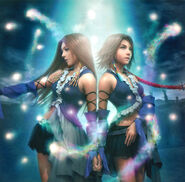 Lenne and Yuna singing in the HD Remaster.