The kind-hearted princess of Tycoon. After her father set out to learn why the winds had died, she grew worried and followed after him--a journey that would lead her to meet Bartz. She is a loyal companion who would gladly sacrifice herself for others.

Lenna is a playable character in Final Fantasy Record Keeper. Originally, she could be recruited via the Collector's Event The Fire Crystal Awakens by redeeming 1,500 Magicite Shards to Dr. Mog. She was also available in the Successors of the Dawn, The Malice Within, and The Princess and the Pirate Challenge Events, and upon completion of the Bonus Quest, "Complete North Mountain Elite (V)".

Lenna's stats and equipment draws are weighted being a mage. She favors white magic over black, as reflected in her high Mind stat. The game positions Lenna as a medic unit, on par with other named white mages, but well above the Core White Mage in terms of proficiency.

Her Memory Crystal could first be obtained as a First Time Reward via the Big Bridge Showdown Challenge Event by completing the Ronka Ruins - Flying Fortress segment under Elite difficulty. To date, she is the only character to be recruitable in one event, but whose Memory Crystal was initially in a separate event in which the corresponding character record is not offered.

Japanese event banner for Successors of the Dawn.

Global event banner for Successors of the Dawn.

Japanese event banner for The Princess and the Pirate.

Global event banner for The Princess and the Pirate. 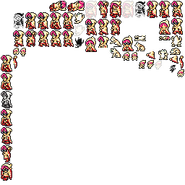 Icon for Attention to Life.