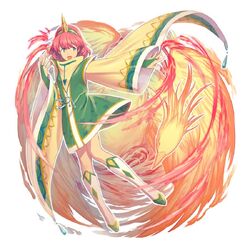 Lenna doesn't makes an actual appearance, but her name is mentioned together with the Blue Narciss in a letter sent by "Kathy".

For the one who sets off to destroy things when stuck, "Lenna" would be your perfect sister, kupo! The kind of princess can teach you about having a compassionate heart. Your lucky color of the day is "Blue Narciss," kupo!

Lenna appears as a playable character.

Lenna's father did his duty as the king of Tycoon till the end; her mother chose to die rather than to exterminate another species. As a Warrior of Light, Lenna never forgets the bravery that they both lived with.

Lenna appears as an unlockable character, and is obtained by collecting White Crystal Shards. Her appearance is based on her artwork by Yoshitaka Amano, using coloration and hairstyle from her original sprite artwork, and she wields the Dancing Dagger as derived from its Final Fantasy V artwork.

Lenna fills the role of healer; she has access to recovery abilities and skills that focus on reducing enemy damage. Her Spirit is higher than Magic, and despite some offensive spells at her disposal, players may want to divert her strengths to protecting the party. 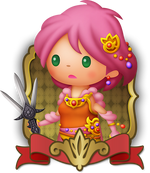 Lenna is an unlockable character, and is now obtained by collecting Light Crystal Shards.

Lenna appears as a playable character.

The kindhearted princess of Tycoon. Worried about her father the king and his journey to the Wind Shrine, she flies out of the castle and meets up with Bartz. Her dedicated heart means she will not shy away from self-sacrifice.

Lenna appears as a summonable Legend depicted in her default Final Fantasy V outfit. Her abilities are Aeroga, Brimstone, Flames of Rebirth, Holy Sword and Kick.

Originally, Lenna could be recruited to the party via the Collector's Event The Fire Crystal Awakens by redeeming 1,500 Magicite Shards to Dr. Mog. She was also available in the Successors of the Dawn, The Malice Within, and The Princess and the Pirate Challenge Events. Lenna was also available upon completion of the Bonus Quest, "Complete North Mountain Elite (V)". 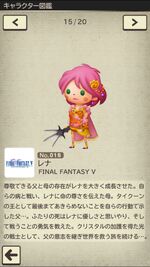 Through all the pain and sadness, my companions were always by my side. This time, I stand with you.

Lenna appears as a character and summonable vision. Her job is listed as Princess.

Lenna's stats at her highest levels are as follows (with no passive abilities taken into account), along with the maximum amount of stat points that can be increased through pot-enhancements:

She can equip the following armors: hats, clothes, light armors and robes.

Lenna appears with many cards, as she represents several of the Final Fantasy V jobs. She also has a card depicting her from Final Fantasy Airborne Brigade. Many of the cards are water-elemental as that is the element she is associated with in the GBA and mobile versions of Final Fantasy V.