The Lemure, also known as the Chamcubia and the Disabler, is an enemy in Final Fantasy V.

She frequently appears with Cherie and Parthenope, a dangerous combination due to their combined penchant for status-inflicting attacks.

Lemure uses Embrace to petrify a target, Spore to poison, and the Blue Magic spell Pond's Chorus to change a party member into a Toad.

Ribbons may rarely be stolen from Lemures.

If the player party has the Necromancer job class, gained by offing Enuo, they're eligible to learn Dark Arts Dark Haze if they slay a Lemure with a Necromancer. 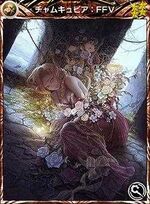 The Japanese name appears to derive from a combination of multiple words. The チャム (chamu?) may be contracted from "charm" チャーム (chāmu?). The キュ (kyu?) may come from the word "cute" (キュート, kyūto?). The ビア (bia?) may come from the second part of the name "Silvia" (シルビア, Shirubia?) which would be relevant because palette-swap Vilia has the first part at the start of its name.

Retrieved from "https://finalfantasy.fandom.com/wiki/Lemure?oldid=3246209"
Community content is available under CC-BY-SA unless otherwise noted.