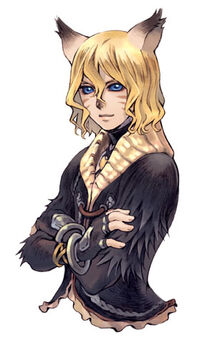 See with your eyes, and listen with your ears, my fellow Mithra... Witness for yourself what one loathed "sinner" will accomplish in this tumultuous age...

A Mithra Black Mage affiliated to Windurst during the Crystal War, Lehko serves as a tactical adviser for the Tarutaru, Robel-Akbel and as such serves on the sidelines of battle. However he does venture onto the battlefield from time to time, particularly during the Siege of Windurst where he entered the battlefield astride a chocobo to save Romaa Mihgo when she was knocked unconscious during combat. He is also the father of Nanaa Mihgo.

As a Mithran he acts kind of playful, lazing around while resting. He also seems to enjoy playing chess. As a male Mithra, a rare gender commodity, he is sought after by many of the female officers under his command. This once turned into the officers feuding with each other for his attention, resulting in him hiding for a brief time until things cooled down.

It is heavily implied that he is the son of Yow Rabntah, a member of the fateful Multinational Expedition. She had found a shard of magicite in the frozen Northlands and used it to construct the Bow of Light. Because of the magicite, the bow became a dangerous artifact and ended up causing a bloody civil war in the Mithran homeland. She, along with Fire Tribe chieftainess Nhev Befrathi, were branded "sinners"; a stigma that seems to be passed on to their children. Nhev evaded the Sin Hunters and arrived in war-torn Mindartia to deliver the Bow back to Lehko on the eve of the Battle of Windurst.

As the Warlock Warlord's tactical adviser, he knew the secret of his true identity. When Karaha-Baruha and Robel-Akbel started losing control of Fenrir as the beast faced down Tzee Xicu the Manifest, Lehko attempted to use the Bow of Light to shoot down the Yagudo Manifest. Before he could fire an arrow, Perih Vashai stopped him, in fear that he would succumb to the bow's power. As a result Tzee Xicu and the beastmen fled back to Castle Oztroja with Fenrir in pursuit.

After the battle, a Mithran tracker informed him that Nhev Befrathi and her daughter were in a caravan attacked by the Yagudo and were presumed dead.