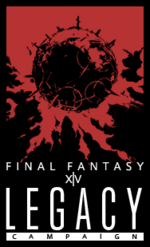 The Legacy Campaign, or simply Legacy, is the VIP membership of Final Fantasy XIV.

Users with service accounts that paid for at least 90 cumulative days of subscription for the original version of FFXIV between January 6, 2012 and suspension of 1.0's billing services on September 29, 2012 became eligible for Legacy benefits in A Realm Reborn; if paying monthly, the absolute latest this could have occurred was on June 29th. Square Enix automatically notified the players via email when they became eligible, and the status is permanent, even if a player did not immediately return to FFXIV upon its relaunch.