Lebreau [ləbʁo] is a character from Final Fantasy XIII and Final Fantasy XIII-2. She is a proprietor of a beach bar in the resort town of Bodhum, and is a member of NORA, a resistance group led by Snow Villiers.

In Final Fantasy XIII, she is a temporary party member, appearing in the first chapter. She fights with a rifle, and can heal in battles.

Friends with Snow from a young age, Lebreau is one of the founding members of NORA. She runs the café they opened to fund NORA's operations, and her cooking is one of the best-kept secrets in Bodhum.

With her brusque, no-nonsense manner, the young woman is treated just like one of the guys, and she would have it no other way.

Lebreau has shoulder length black hair and light brown eyes. She wears a purple halterneck bikini top, and a loose sheer white blouse. She wears a gold chain necklace and a rainbow-colored bracelet, microshorts and a belt that matches her bikini top with a sash. She wears red shoes and thigh-high stockings with a lace trim at the top. She has a butterfly tattoo on her shoulder-blade.

Character designer Nao Ikeda has said, "She talks and acts much more mature for her age, and sometimes acts as if she's the mother of NORA," giving insight into her personality.[citation needed] Lebreau is independent and upbeat, always ready to help others.

Lebreau comes from the seaside town of Bodhum, where she tends a bar near to the beach. She watches over members of the self-funded monster hunting group NORA, along with Snow, Gadot, Yuj, and Maqui.

When the Purge was initiated to all Bodhum residents due to the discovery of a Pulse fal'Cie at the Pulse Vestige ruins nearby, Lebreau joins NORA, which was turned into a resistance group against the Sanctum.

Final Fantasy XIII Gaiden Shōsetsu: Yumemiru Mayu, Akatsuki ni Otsu tells the story of what happened to NORA after Snow left for the Pulse Vestige. NORA guided the surviving Purgees to take refuge in a crevice in the ground. After breaking through PSICOM's defenses they escaped the Hanging Edge and hid inside an ancient Pulsian building inserted between the layers of Cocoon's outer shell during its construction, a large vestige that "shouldn't" exist and the perfect place for the Purge survivors to lay low and wait out the army's search efforts. Gadot led a combat team to ensure everyone's safety and food and supplies were sent through Lenora's Garage, a shop maintained by Maqui.

By hacking the Sanctum's information channels through his own network, Maqui tapped into a live feed and projected a hologram of a broadcast from Palumpolum being captured by a military surveillance camera. The footage depicted a plaza turned into a war zone as a pillar of ice conjured by magic froze everything, and a Pulse l'Cie. NORA recognized the l'Cie as their leader, Snow. Having been worried about Snow since the Pulse Vestige plummeted into Lake Bresha, the news of his survival bring relief to NORA who begin planning their next step as Snow's appearance was the sign they needed to build a resistance movement to help him.

As the Sanctum's troops are concentrated around Palumpolum, leaving holes in the security around the Hanging Edge, NORA and the refugees would be able to escape, and they leave their shelter and set out for Eden, the capital of Cocoon and the Sanctum's seat of power. Along with Gadot, Yuj, and Maqui, Lebreau meets Snow and his party in Eden, where they declare their loyalty to him despite him being a l'Cie. As Snow's party continues on toward Orphan's Cradle, NORA stays behind to evacuate Eden.

After Cocoon's fall many citizens moved to Gran Pulse. NORA helped build the town of New Bodhum on the coast where Lebreau again opened a cafe. When a monster attacks Serah, Lebreau rushes in, shooting it down and saving her. She posits that Serah has to look after herself now as Lightning is dead, but is knocked unconscious by another monster, terrifying Serah. After the battle, Noel lays her before the NORA house, saying that she needs to rest.

The next day, Lebreau catches Gadot, Maqui, and Yuj eavesdropping on Serah, Mog, and Noel when they are about to leave through a Time Gate.

After the destruction of the old world NORA members' souls found their way to the new world where they were reincarnated and established a restaurant, the "Nora House." One day, a reporter investigating the stories of people having memories of a past life in another world visits the restaurant and orders the Nora Special. The taste triggers a flood of memories, and the reporter recalls her past life: she was Aoede, a reporter caught up in the Purge who helped expose Sanctum's lies by airing Purge footage with the help of broadcast hacks by Maqui. The members of NORA remember Aoede and Lebreau tells her where to find Serah.

Lebreau is a temporary party member, and she has the exclusive Potion ability to heal all other characters during battle. Potion is shown in the ability menu to cost two ATB segments, while during battle it costs only one segment. According to the Ultimania it costs 1.5 segments.[citation needed] She fights with a rifle. Unknown to the player, Lebreau's Attack command costs two ATB segments to execute compared to the main cast, where it costs one ATB segment. Due to her being a temporary character, her status, abilities, and inventory cannot be viewed on the main menu. She has the full ATB gauge, which is six segments. Her HP is shown as ???, but is fixed at 330.

By using an Xbox 360 hack, Lebreau can be made playable beyond her stint in the Hanging Edge.

This hack exists on the 360 port, and is later possible on the PlayStation 3.

According to the Final Fantasy XIII Ultimania Omega, Nao Ikeda was inspired by an unused piece of Final Fantasy X-2 concept art when designing Lebreau. Her design was based on volleyball players inspired from the images of butterflies flying along an Asian beach resort. Lebreau's character design and costume is due to the beach location of NORA's base.[2]

Small differences exist between the pre-release model of Lebreau and the retail one, including some shading in her face and her breasts, the blue tassels hanging from her waist are slightly different, and the stockings are made darker in the retail version.

Lebreau during the battle at the Hanging Edge.

Lebreau and Yuj during the Siege of Eden. 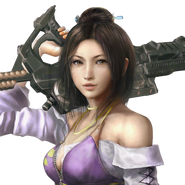