Everything goes for the mighty Leblanc!

The syndicate is led by Leblanc and her two lackeys, Ormi and Logos, without whom she does not go anywhere. Other units include mask-wearing melee infantry units known by their ranks: The tier-3 Goon and She-Goon, the tier-2 Mr. Goon and Ms. Goon, and the tier-1 Dr. Goon and Fem-Goon. Their uniform consists of a mask and a skin-tight outfit, pink for women and army green for men. They receive lousy salary, and are poorly treated and incompetent. They fear being punished, which they refer to as "getting the heel".

Despite all this, the syndicate members revere Leblanc, considering her a godsend. They are rejects, shunned by or excommunicated from other groups of Spira. Ormi and Logos were high-ranking members of the Yevon in charge of their dirty works. The two masked guards flanking the entrance to Chateau Leblanc are Al Bhed; one has fled from the disastrous Operation Mi'ihen and the other had gone rogue after Cid destroyed the Al Bhed's Home.

The syndicate deploys machine gun-wielding snakes. Both the male and the female goons carry melee weapons, but only the latter is capable of using Black Magic.

Acting as rivals to the Gullwings, the Leblanc Syndicate often competes with them for treasure spheres. During one such encounter, Leblanc steals Yuna's Garment Grid, planning to perform a concert in Luca in Yuna's likeness and cash in on her fame and ruin her image.

Yuna, Rikku, and Paine pursue Leblanc to reclaim the Garment Grid. While Rikku and Paine gatecrash the concert and confront Leblanc, the real Yuna dons a moogle disguise and keeps a low profile. In the end, Leblanc returns Yuna's Garment Grid and retreats with her goons.

When Yuna, Rikku and Paine discover the Leblanc Syndicate has robbed them, they search around for syndicate uniforms to sneak into their headquarters. After finding the three uniforms needed, the girls infiltrate Chateau Leblanc and discover Leblanc stole their half sphere because she already had the other half. The girls are discovered and battle Leblanc, Logos and Ormi. Suffering defeat yet again, Leblanc shows the record from the now restored sphere that depicts Vegnagun, a colossal machina weapon hidden underneath Bevelle. Leblanc reveals her reasons for founding the syndicate and hunting for spheres: she is in love with Nooj, the leader of Youth League, who wants to make Spira's concealed history known to every citizen.

Recognizing Vegnagun as being capable of destroying Spira, Leblanc forms a truce with the Gullwings and accompanies them to Bevelle. In the hole made by the fayth's disappearance, the groups discover the Bevelle Underground, a hidden complex filled with machina. Arriving at Vegnagun's location and battling a corrupted Bahamut, Vegnagun is nowhere to be found and a deep hole is left in its place. Fiends begin to pour out from the former temples of Yevon and while the Gullwings head off to save the populace from rampaging fiends and pacify them with a concert on the Thunder Plains, Leblanc becomes depressed. She tries to find Nooj, but he has already headed for the Farplane to look for Vegnagun. Leblanc returns with Logos and Ormi after Yuna's concert to team up with the Gullwings and infiltrate the Farplane and fight Vegnagun. They meet up with Nooj and his friends Baralai and Gippal and help the Gullwings dismantle the machina weapon.

After peace returns to Spira Leblanc moves to Mt. Gagazet.

The Leblanc Syndicate "goons" are fought as enemies. The Goons and Fem-Goons use physical attacks, but only the latter uses Black Magic. The Syndicate also use machina snakes that they can call during battle. Leblanc and her cronies are also fought as recurring bosses, Ormi being the most recurring boss in the game. 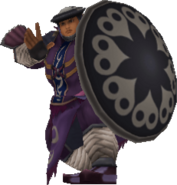 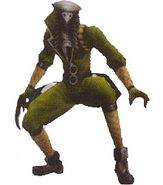 The Leblanc Syndicate in the Floating Ruins on Mt. Gagazet.

A Goon in Zanarkand.

Leblanc's Sphere with the Leblanc Syndicate emblem on it.

[view · edit · purge]Leblanc (pronounced leh-blonk) is a contracted form of le blanc, "the white" in French. Blanc is the masculine form of the adjective; blanche is the feminine form.

Given her thieving nature, she may also be named after Maurice Leblanc, author of the novels about the master thief, Arsène Lupin.