We treat leather with no less respect than the living creatures whence it comes, and craft goods of the highest quality. In so doing, we honor the lives lost, and minimize the need for further killing─an oft-forgotten benefit of our products' surpassing durability.

The Leatherworker is a Disciple of the Hand in Final Fantasy XIV.

Leatherworkers are craftsmen who refine the hides, pelts, and furs of Eorzea's wildlife into garments to be worn from head to toe. Foremost among their creations are leather protectives, which are more substantial than cloth, but lighter and more pliable than chain or plate.
The Elezen have long been known for their skill in leatherworking, yet for centuries their techniques were heavily guarded. Once they agreed to share their wealth of knowledge, the quality of Gridanian leather goods improved significantly, creating an increased demand for the superior products.

Contrary to popular belief, a leatherworker's skills are not limited to the mere boiling and dying of pelts and skins, but also encompass those of an armorer and clothier, for a true leatherworker would never entrust his hides to the hands of another. Perhaps a leatherworker's most arduous and time–consuming task is procuring the various coats and furs necessary for his trade, which is the reason why many who choose this profession tend to dabble in hunting and trapping as well.

Leatherworkers can process the hides of Eorzea's wildlife into material for making armor, accessories, and various furniture. They could also craft barding for Chocobos.

Leatherworkers use knives as their primary tool and awls as their secondary. Their armor is primarily made up of "Crafting" gear that they share with other disciples of the hand. Crafting gear provides bonuses to the craftsmanship, control, and CP attributes. Craftsmanship and control respectively improve their progress and quality gains when crafting. CP is the resource they use in place of MP for their abilities.

Soul of the Leatherworker is equipped.

The following abilities have been removed. Removed abilities will still appear on the hotbar, their icon greyed out icon with a red strikethrough. They will have no effect and must be removed by the player.

Leatherworker appears in a wind-elemental card. 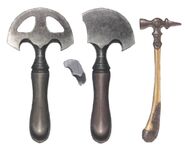