The Leather Suit (レザーコンシャス, Rezā Konshasu?, lit. Leather Conscious) is a recurring outfit in the Final Fantasy series. It first appears in Final Fantasy VII: Advent Children and is worn by Tifa Lockhart.

The Leather Suit is composed of mostly black leather, a white tank-top under a black vest with a zipper going up the center, black leather overhauled shorts with a long cape at the back of Tifa's waist and black gloves. She wears dark boots and Tifa's hair is shorter than it was in Final Fantasy VII, reaching mid-back. A small pink ribbon is wrapped around her left bicep in memory of Aerith Gainsborough.

Tifa dons the Leather Suit as her outfit. She briefly appears in her Final Fantasy VII attire for a flashback, but otherwise wears the Leather Suit. Her outfit was redesigned with emphasis on expressing her physical qualities while being pleasing to the eye. Her hair was cropped due to the difficulty of animating her original length of hair, as well as problems that arose due to its dark color and lighting.

Leather Suit replaces her old attire from Advent Children onwards, and she wears it in the On the Way to a Smile anime, and in Dirge of Cerberus -Final Fantasy VII-.

The Leather Suit is an alternate outfit for Tifa that can be bought from PP Catalog for 350 PP.

The Leather Suit is an alternate outfit for Tifa. It has two alternate colorations on top of the default black.

Tifa's Leather Suit outfit, called Tifa #2, serves as the main representative of Final Fantasy VII: Advent Children and can be available from the start by transferring save data from the second demo into the retail game. If the player did not select her among their party of four, or download the demo, she can later be unlocked by collecting Green Crystal Shards. Her Limit Break-type ability is Final Heaven.

When performing some of her abilities, Tifa wears the Leather Suit.

One of Tifa's cards depicts her wearing the Leather Suit.

The Leather Suit appears as a Wardrobe Record for Tifa. It is merely an aesthetic change and does not provide any special effects.

Some of Tifa's cards depict her wearing the Leather Suit.

Tifa can appear in the Leather Suit. 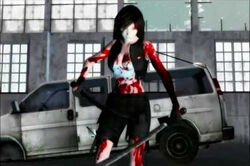 ): the leather vest is torn on the left side and becomes tattered, the white tank top is torn to reveal her cleavage and half of her bosom at the left side, her black gloves get holes, the left sleeve of her overhauled shorts became shorter, and the black cape gets a shredded edge. Toward the end of Dead Fantasy V, the damaged cape is not seen when Tifa decapitates most of Hayate's shinobi.

On the Way to a Smile. 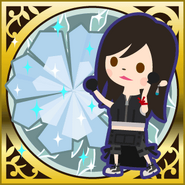