Learning is a Level 2 Blue Mage ability that requires 20 ABP to learn. If the character is a Mime or Freelancer with the Blue Mage mastered, they do not need to equip this ability in order for it to be active.

With Learning, the characters can learn Blue Magic when being hit by it.

Infrequently grants the ability to discern the secrets of enemy actions wielded in battle and make them your own.

Learning is a Level 1

Blue Mage trait that allows a Blue Mage to have a chance to learn enemy actions. In order to learn an action, the Blue Mage must engage the enemy in combat, witness the action, and still be alive at the time of the enemy's defeat. Only select enemy actions can learned.

There are a few spells that can be learned by having it cast on the characters while in a specific job.

Ultima has a 100% chance of being randomly learned in battle if cast on Ramza's Squire job and Alma's Cleric, both during chapter 4, so long as they are damaged but not KO'd by the spell, or absorb it and heal at least 1 HP.

Firaja, Blizzaja, and Thundaja have a 30% chance of randomly being learned in battle by a Black Mage who hasn't learned the spell yet and is damaged but not KO'd by the spell, or absorbs it and heals at least 1 HP. Nullifying the damage does not count.

Hasteja and Slowja have a 20% chance of randomly being learned in battle by a Time Mage who has yet to learn the spell and is inflicted with the status.

Study attacks against you. Learn some as blue magic.

Learning is a Blue Mage ability learned from the Blue Saber for 400 AP. When equipped with Learning certain enemy abilities can be learned and then utilized by the player. The user must survive the attack in order to learn it.

Learn is a passive ability learned by the Blue Mage job from the Light Saber weapon for 100 AP. This is one of the few abilities that can be learned from a piece of equipment available from the start. To learn an ability, a Blue Mage must be successfully attacked by a monster with that ability while equipped with the support ability Learn. 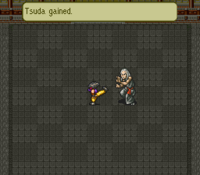 The Blue Mage mechanic is used during the Present Day Chapter. Masaru can learn new combat styles from the fighters he fights against in the global fighting tournament, he must be hit by the martial arts technique. He can immediately use the learned technique after acquiring said technique.

In Bravely Default, Genome Drain is a support ability for the Vampire job class that allows characters to absorb enemy attacks if they are hit by them.

In Bravely Second: End Layer, Learning is the job level 6 support ability for the Catmancer, as well as its innate ability. It allows the player to learn certain enemy abilities when they are used against them. Only one party member needs to have Learning equipped for all to benefit from its effect. Any job can equip it for the cost of 1 slot.

Final Fantasy Tactics A2: Grimoire of the Rift.
Support abilities
Community content is available under CC-BY-SA unless otherwise noted.
Advertisement