Unattainable dreams are the best kind.

Lazard Deusericus is the director of SOLDIER within the Shinra Electric Power Company in Crisis Core -Final Fantasy VII-. He sends Zack Fair on missions and acts as the union executive overseeing SOLDIER's management, drawing up rough strategy guidelines. Lazard does not have the combat abilities of a SOLDIER, and thus does not operate directly in the field. Within Shinra, he has received promotions at an exceptional speed to attain his present status. Despite his calm and cool exterior, Lazard bears a burning ambition and a strong sense of justice for the people of the Midgar Slums.

Lazard wears a striped blazer paired with a pink or white shirt, a purple or blue tie, and a pair of white gloves. He wears blue glasses. He has coiffed blond hair and blue eyes.

As an Angeal Copy

, Lazard takes on Angeal Hewley's hairstyle and face, but has begun to degrade until his hair is white and his clothing faded. He bears two white wings on his right side similar to Angeal.

Lazard is polite, courteous and friendly to his SOLDIER subordinates, but maintains a professional conduct. He admires Zack's skills and praises him for the quality of service he contributes, personally having him handle important missions after witnessing him in the field in spite of Zack only being a Second Class. When speaking to Zack while at the end of his life as an Angeal Copy, Lazard explains he aided Hollander and Genesis out of holding a grudge against Shinra, but now that he is an Angeal Copy, his desire for revenge has faded, and he wishes to help Zack and rescue Genesis to save the world. Zack attributes this to Angeal's will living on within Lazard, but whether this is the reality is unclear.

Lazard was born to a slum-dweller. Though raised by his poor mother, the Shinra Electric Power Company hired him, eventually rising to the position of director of SOLDIER. Lazard knows he is President Shinra's illegitimate son (and thus Rufus Shinra's older half-brother), and despite his supposed loyalty to Shinra, never abandons his support for the "children of the slums". Lazard has aligned with the Science Department to conspire against Shinra, and after Genesis suffers an injury while sparring with Sephiroth, Dr. Hollander informs Lazard of the SOLDIER's origin. From that point on the three work to form the Genesis Army to enact a war against Shinra.

Zack meets Lazard as a SOLDIER 2nd Class when his mentor, First Class Angeal Hewley, calls him to the Shinra Building Briefing Room. Lazard explains the First Class SOLDIER Genesis went missing in Wutai, and deploys Angeal and Zack for the remote western nation. In Wutai, Lazard arrives late to the battle, using his field inexperience as an excuse. Angeal is nevertheless happy to see him. Lazard explains he decided to do this because he had guided their forces during the war and wanted to watch them win with his own eyes. Lazard praises Zack for distracting the enemy and helping Angeal, and wants him for the next mission. Lazard meeting Zack and Angeal on the field was in part a cover-up that allowed for him to check in with the members of the Genesis Army stationed in Wutai (the true reason for him being late for his meeting with Angeal and Zack), as well as to evaluate Zack as a risk to their plans.

After Angeal goes missing Zack asks if Lazard has heard anything, but he claims he cannot get a hold him. Lazard wants Zack to investigate Genesis's hometown of Banora with Tseng of the Turks. Though Genesis's parents claim he is not around, Lazard labels them untrustworthy sources. Lazard had sent people previously, but has had no contact with them since.

After Zack uncovers Genesis's operations in Banora, Lazard promotes him to a 1st Class SOLDIER. Zack does not feel as elated as he thought he would, but Lazard understands, as a lot has happened within the last few days. Lazard asks Zack to terminate both Genesis and Angeal, now deemed rogue SOLDIER members within Shinra, with Sephiroth going with him. Unhappy, Zack wants to know why, but Lazard claims the Shinra army is asking him to. The alarms ring for intruders, and Lazard tells Sephiroth to protect the President and deploys Zack to the entrance. After Genesis Army's attack on the Shinra Building, Lazard disappears. Many at Shinra believe he was secretly funding Dr. Hollander with the company's money, as Lazard had done an unusual amount of research on Hollander, his cover for funding the man's research as well as the Genesis Army.

Lazard transforms into an Angeal Copy due to injecting himself with Angeal's cells. He breaks off his alliance with Hollander and Genesis and embarks on a search for Zack. He begins to suffer from the same degradation Genesis and his copies suffer from. During the four years Zack is imprisoned in Nibelheim many sightings of Angeal are reported, but these are, of course, Lazard. Zack searches for Lazard after escaping Nibelheim, believing him to be Angeal. Their paths cross in Zack's hometown of Gongaga when Lazard flies in to help Cloud Strife, who is suffering the effects of mako poisoning and Jenova cells.

Hollander knocks Lazard down during his pursuit of Cloud's Jenova cells, but Zack kills Hollander. Lazard explains he is an Angeal copy and had been following Dr. Hollander since Junon after assisting in his escape. After becoming a copy he forgot about his revenge. Lazard's feelings have changed to the feelings Angeal once held: to help Zack, to save Genesis, and to save the world.

Zack, a catatonic Cloud and a degrading Lazard set off to Genesis's hometown of Banora Village where the lifestream shoots up into the sky. Soon after Zack leaves to investigate, Shinra soldiers attack Lazard who remained behind to look after Cloud. As Zack returns after a battle with Genesis, he finds Lazard with Cloud next to a Banora White tree. With his last breath, Lazard tells Zack he fought Shinra troopers while protecting Cloud with another copy. Zack realizes the one who fought alongside Lazard was the canine Angeal Copy that once protected him before. Lazard and the Angeal Copy return to the lifestream, and as the copy disappears, a letter for Zack from Aerith is left behind in its place.

Lazard is the only known human Angeal Copy. There are several hints about Lazard being President Shinra's son. If Zack speaks to a woman outside Aerith's church until Chapter 6, she will gossip about the President's affair with Lazard's mother. Also during Chapter 6, the Shinra guard outside Lazard's office says Lazard reminds him of the V.P. (Rufus Shinra).

During a certain part of the game, Zack can talk to Lazard and he will tell him that "There's always a high price to pay for freedom". This implies Zack echoes both Lazard and Angeal during his last stand.

In the English release of Crisis Core -Final Fantasy VII-, Lazard is voiced by Stefan Marks. He is voiced by Junpei Morita in the Japanese release. 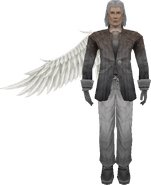 Lazard's office as director of SOLDIER.

[view · edit · purge]Lazard is a French surname derived from the Eastern European name Lazar, meaning "God help him". The name is also considered to be connected to the New Testament story of Lazarus. [view · edit · purge]Deusericus is a reference to Shinra. It bears the same meaning as the kanji used to write Shinra (roughly "Silken God"), but written in Latin (the other meaning for the second kanji is "Rome", which is used in the Japanese word for Latin).

Lazard's surname was added to the game's English version. In the Japanese version one of the MPs working on the investigation surrounding Lazard mentions that some of his personal and family records may have been falsified. This may include his surname.