In Nova Chrysalia, a world where no new humans are born, there are limited numbers of each monster species. When Lightning manages to slay all the monsters of a species, it goes extinct, never to be seen again.

The Last One (ラストワン, Rasuto Wan?), known in Japan as Last Enemy, refers to the final instance of an enemy's genus in Lightning Returns: Final Fantasy XIII. These enemies have a fuchsia glow, are more dangerous than other representatives of their genus. Defeating an enemy's Last One incarnation will remove its genus from Nova Chrysalia. Some genera can't be eradicated. Some mechanical enemies can be eradicated (Hoplite, Dreadnought, and Aster Protoflorian), but human-type enemies, along with Anubys and Set, cannot. Meonekton has an eradication rate of 65,535, but can be eradicated on the bonus day's bonus dungeon, the Ultimate Lair. The lair is on the Dead Dunes inhabited exclusively by Last Ones, with one guarding each floor, save for the final five floors. Killing the Last Ones here exterminates the respective enemy in all of Nova Chrysalia, making some selective extinction in the Ultimate Lair useful for farming items from monsters that have a low spawn rate.

Last Ones are born as a result of defeating every member bar one of a certain species causing their energies to empower the remaining survivor. The Last One will appear in the field once every other member has been defeated. They are more difficult to defeat than their normal version, and can have as much as five times the HP of a regular monster of the same species, with enhanced offensive and defensive stats, enhanced abilities and increased aggressive behavior. For example, the Gremlin has 5,600 HP and can be easily staggered with physical attacks while it casts first tier spells, but the Gremlin Ω has 22,400 HP, casts third-tier spells—like Blizzaga or Aeroga—resists stagger and even attacking it while casting spells won't entirely interrupt the casting unless it is a combo finisher attack, and its casting time is faster than that of the regular Gremlin.

Because of the gap in power, the player is encouraged to not tackle a Last One until they are well-developed, close to Days 5–6, to have enhanced stats, better equipment and abilities they can use, such as debuffs or garbs that provide high defense, or are well-versed on a specific element. Although more powerful, the Last One's attack pattern is mostly the same as their regular version's, their stagger conditions remain the same (albeit more difficult to accomplish), and their resistances are equal. Using this info, the player can prepare the proper schemata and strategy and fight them with the proper precautions.

Last Ones drop a glowing item on the ground where they were fought, which may be a powerful weapon or accessory. They can also drop upgrading components and high-level abilities. The weapons dropped by Last Ones are fuchsia-colored and more powerful than ones dropped by the normal monster; by comparison, the Shard Blade dropped by the Reaver provides 550 in both Strength and Magic, while the Flesh Render dropped by the Reaver Ω provides 900 for both. Accessories dropped by Last Ones often include auto-abilities and can boost HP and Strength or Magic simultaneously, something no other accessory can do. There are only three Last Ones that drop weapons (Reaver Ω, Skeleton Ω, and Cyclops Ω). The other Last Ones drop accessories.

A victory screen with message regarding defeating a Last One. 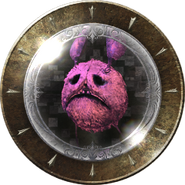 Harbringer of Death, a trophy/achievement awarded for slaying one Last One. 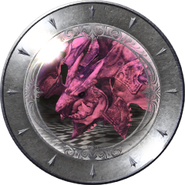 Goddess of Death, a trophy/achievement awarded for slaying ten Last Ones.

The capital omega (Ω) indicates being the last of their genera, as omega is the final letter in the Greek alphabet.

An endling is an individual that is the last of its species or subspecies; once it dies, the species becomes extinct.