The men of my family, we are taught to place the needs of others before those of our own. I will see that you are kept from harm. It is my duty to House Solidor.

Larsa Ferrinas Solidor, also known by the alias Lamont, is a temporary playable character in Final Fantasy XII. He is the fourth son of Emperor Gramis and younger brother of the consul, Vayne Solidor.

Larsa is twelve years old and has long, dark hair, similar to Vayne's. He wears a bell-sleeved blouse with gold detailing beneath a dark tunic, with navy shorts and green, thigh-high leather boots. Around his neck he wears a blue emblem of House Solidor that hangs between the lapels of his collar.

Despite his age, Larsa is mature, gentrified, and speaks formally. Many place their hopes in him to become a great emperor. He is cognizant of world events and wishes to help avoid war. Larsa is polite and respectful to others regardless of their class and ethnicity and often puts his faith in others to do what is right. He is idealistic, driven by his desire to restore the name of House Solidor, and lead the Archadian Empire in the most noble of ways, even if it means defying his brother, Vayne. He is wholly devoted to his family, his country, and preserving peace.

Forgive me, I presumed overmuch. I could think of no other way to avoid bloodshed. If you cannot trust me, then please, take me as your hostage.

Larsa was born in the year 694 Old Valendia into the House Solidor, the ruling family of the Archadian Empire. Larsa is the youngest of Emperor Gramis's four sons, two of whom were killed by Vayne's hand by their father's order. As the year 704 approaches, Larsa becomes increasingly aware of the political tension between Archadia and its rival, Rozarria. His brother Vayne assumes a position within the Empire while Larsa grows curious of his father's intentions. Unbeknown to Larsa, the Imperial Senate are pressing his sickly father to choose between Larsa and Vayne as his heir.

Larsa travels to the Bhujerba with the intent of exploring the Lhusu Mines without the monitoring of an escort. Waiting outside the aerodrome, he overhears Balthier, Basch, Fran and Vaan discussing their pending trip to the mines, and asks to accompany them under the moniker of "Lamont". Within the mines he finds magicite, and realizes Archadia is using it to make manufacted nethicite.

Before Balthier can ask him about his intentions, Ba'Gamnan attacks the party and Larsa flees, beckoning the others to follow. Outside, he meets up with Judge Ghis, who is currently holding Penelo under surveillance, outraged at having discovered a civilian in the mines full of the Empire's secrets. Realizing Penelo is the girl Vaan was seeking to save from Ba'Gamnan, Larsa takes her under his wing and Ghis reluctantly obeys. From the shadows, Balthier tells the party Lamont's true identity. At the estate of Marquis Ondore, the leader of Bhujerba, Larsa tells Penelo he is Vayne's brother, but asks her not to fear him as he promises to ensure her safety.

Basch seeks the Marquis's aid in rescuing Princess Ashe from the Empire, and Vaan wants to reunite with Penelo, having heard Larsa took her to the Marquis's estate. They gain an audience with him, and, knowing Ashe is held prisoner on the empire's battleship Dreadnought Leviathan captained by Judge Ghis, the Marquis has the group captured and sent to the Leviathan.

Larsa also boards the imperial ship—presumably alongside Ghis—with Penelo. When the party frees Princess Ashe from captivity and escapes with Vossler's aid, deactivating the security, they run into Larsa and Penelo. Larsa tells the party to find an escape route, while he leaves with Vossler. Before he goes, Larsa gives Penelo a shard of manufacted nethicite to keep her safe. The party fights Ghis and in the Judge's defeat they escape with Larsa on an Atomos, and return to Bhujerba. In the skycity, Larsa bids the party goodbye and is escorted back to Archades.

In the manga adaptation, Vossler takes Larsa hostage aboard Leviathan to safeguard their escape, but Ghis ignores this saying Larsa is an Imperial and thus willing to die for the Empire. He unleashes his magick at the party but Larsa's piece of manufacted nethicite quells it, allowing the party's escape. Larsa orders Ghis to report the incident since the escapees have no proof of their identities, commenting there need not be a report of Larsa's capture and Ghis's reaction to it.

Larsa believes Princess Ashe to be instrumental in preserving peace, and tracks her party to Jahara where he asks her to join him in meeting someone at Mt Bur-Omisace, someone who can help prevent the war. Ashe doesn't initially trust him, but Larsa begs Ashe to take him as her hostage to prove his sincerity. To get to Mt Bur-Omisace, the party must go through the Golmore Jungle, but their passage is blocked by magickal barriers. The party ventures into the Henne Mines to seek out Fran's sister, Mjrn, who Fran thinks would help them repel the barriers, but find her possessed by a mysterious being, grasping a piece of manufacted nethicite. Larsa notices the nethicite Mjrn is holding, but she drops it and it breaks, releasing her from the phantom's grasp. After coming to, Mjrn tells the party she was taken by the Empire and given a stone that drove her into a Mist-frenzy, and Larsa identifies it as manufacted nethicite. He asks if Penelo still has the piece he'd given her earlier, and when she confirms, he snatches it from her, saying he should never have given it to her, apologizing for his ignorance of its hazardousness.

They return Mjrn to Eruyt Village within the Golmore Jungle and gain a means of passing through the magick barriers. On Mt Bur-Omisace, Larsa's contact turns out to be Al-Cid Margrace, a member of the ruling family of Rozarria. Al-Cid regretfully informs Larsa that Emperor Gramis has been assassinated and Vayne has succeeded him as Emperor, and as such, negotiations are impossible as Vayne is bent on starting a war. Judge Drace attempts to place Vayne under arrest for treason, but the other Judges are on Vayne's side. Vayne doubts Judge Gabranth's loyalty, knowing Gabranth has been reporting on him to the Emperor, and orders him to execute Drace to prove himself. Under her breath, Drace asks Gabranth to obey Vayne, and urges him to protect Larsa.

Larsa stays at Mt Bur-Omisace while Ashe's party ventures to the Stilshrine of Miriam. Gabranth arrives and takes Larsa back to Archades where he tries to talk his brother out of war, but Vayne ignores him. When the Sky Fortress Bahamut is activated, Vayne takes Larsa onboard to show him what happens to those who resist the Empire. Larsa, still hoping to avoid bloodshed, begs his brother to reconsider, but it is futile. When Ashe's party infiltrates the ship to confront Vayne, he tells Larsa to stay away. Larsa draws his sword on his brother, saying he can no longer idly stand by.

Larsa is momentarily knocked out by Vayne upon his transformation into Vayne Novus, telling Gabranth to protect Larsa, which Gabranth obeys by turning on Vayne as well. When Vayne is about to lay the finishing blow on the former Judge, Larsa intervenes and holds up the piece of manufacted nethicite, absorbing Vayne's magickal swords. Vayne heads out to the deck and merges with Venat, but Ashe's party kills him. The party flees the descending Bahamut on Balthier's airship where Larsa contacts the other fleets and issues the command to the Archadian Imperial Fleets to stand down, announcing himself as the new Imperial commander.

A year later, a thirteen-year-old Larsa is Emperor with Basch as his protector, having assumed the identity of his twin brother Gabranth who didn't survive the final battle. Penelo still corresponds with Larsa, saying she would enjoy seeing him again.

Vaan's party encounters Emperor Larsa accompanied by Basch when they seek help on the mainland. Larsa expresses concern about the Judge of Wings and how she is causing chaos all over Ivalice. He joins the party under Basch's supervision, but stays aboard Vaan's airship, the Galbana. In the Sky Saloon he offers "all sorts" of potions but Vaan replies potions aren't much use against Yarhi.

Larsa's comment in Final Fantasy XII: Revenant Wings about offering "all sorts of potions" may allude to his original gambits of using X-Potions and Hi-Potions in limitless supply.

The theme associated with Larsa is called "Coexistence (Imperial Version)" and plays when the party first meets him.

Larsa has made appearances in the following games in the Final Fantasy series:

Larsa is voiced by Johnny McKeown in the English version. There were some budget questions with the use of a young actor as Larsa's voice in English, who tend to be more costly than using an adult woman to voice the young boy roles. This is because of additional studio time for getting through something like acting to lip animations with a child actor who doesn't have a lot of experience with that, and there are extra costs tacked on for things like tutors. The translators deemed it well worth it, however, to get a good performance.[2]

He is voiced by Yuka Imai in the Japanese version. 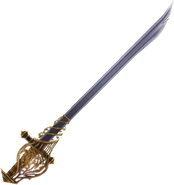 Promotional art for The Zodiac Age.

Promotional art of the Solidor brothers.

Larsa in the Lhusu Mines.

[view · edit · purge] Larsa was a major city in ancient Sumer. Larsa was an important political force because it was the cult center of the sun god, Utu, and often controlled the ports on the Persian Gulf.

The weapons Larsa uses, the Joyeuse and the Swordbreaker, are high tier weapons found in both Final Fantasy Tactics Advance and Final Fantasy Tactics A2: Grimoire of the Rift. The Joyeuse (French feminine word for "happy"), is named after the legendary sword of the Frankish King Charlemagne. This sword is one of the oldest French crown jewels. The Swordbreaker is a variety of specially designed parrying daggers made to ensnare and potentially break an opponent's blade or disarm an opponent.