Eight continents, one of which is currently inaccessible

Lapis is a world in the Final Fantasy universe, serving as the primary setting for Final Fantasy Brave Exvius. It is connected to the Farplane.

A world of crystals that contain the legendary visions that transcend space and time, Lapis also houses six great elemental crystals that maintain the world's balance. Politically, Lapis is mainly comprised by continental nations, of which five have claimed one of these crystals as their own.

The population of Lapis is comprised by recurring races from the series, amongst which humans make up the vast majority. The underground-dwelling dwarves currently inhabit the Dirnado continent and are known to work on airships alongside humans. Elves are nowadays rarely seen due to their dislike for humans and their low numbers caused by a catastrophe about 700 years ago. Moogles, whose origins lie in the Farplane, are known to come and go as they please through the use of monuments scattered around the world.

In the current era, it has been theorized that most of the people now living in Lapis have some Paladian ancestry. Proof of such ancestry would be the power of visions (a power which the people of Paladia hold from the time they are born), which simply lies dormant within their descendants.

According to Montana's logs, in ancient times Lapis was home to many sapient creatures—many more than the humans and dwarves known to most in the current era. However, a catastrophe that likely wiped most of them befell the world 700 years ago, due to Paladian interference. Lapis was known to Paladia, whose inhabitants had mastered technology to create gates using dimensional rifts and were aware of other worlds due to their power over visions.

At the time Paladia was torn apart by a civil war between the peoples of Aldore and Hess, the latter wanting to reclaim its independence after centuries of 'subjugation' by the former. However, the emperor of Aldore, Vlad (who had seized the throne by assassinating King Varenis and his son Rubens), and other leaders feared the Sworn Eight of Paladia's power and influence over the people as heroes. Especially that of their leader, Raegen or 'Veritas of the Dark', who secretly was Rubens' son (thus the rightful heir to the Aldore throne) and a sympathizer to Hess' cause. So, in order to end the war, they tricked the Sworn Eight into engaging their counterparts, Hess' Eight Sages, and sealing them inside crystals as their armies clashed, on promises of granting Hess its independence during peace negotiations.

In truth, the Aldore leadership had created a dimensional gate, and banished the Veritas, the Eight Sages, the soldiers of Aldore and Hess, and the very land they stood upon, to Lapis. To ensure that it would remain fixed to Lapis for ages to come, Aldore put a seal upon the land, which also kept the Eight Sages imprisoned: eight great crystals, each corresponding to one of the elements (Fire, Ice, Lightning, Water, Earth, Wind, Light and Dark). The force generated by the land passing through the gate was tremendous in scale, destroying nearly half of Lapis in the process.

In the aftermath, many battles broke out between the Paladian soldiers and the people from Lapis who had survived the catastrophe, but in the end, most Paladian chose instead to live side by side with the native inhabitants, mixing their bloods. The dwarf Ruggles and the elves Lunera and Bran were survivors of the 'great disaster', which Ruggles described as if "the land broke in two".

In the following centuries Lapis' nations as they are now appeared. The earliest was Magi Nation Mysidia, one of its founders being Sakura or 'Veritas of the Bolt', as it boasts the longest history of any nation in Lapis. The birth of the Kingdom of Grandshelt was the work of its legendary founding father (in truth Raegen). The Olderion Federation arose from the town of Olde, which later became the Aquapolis, after Folka—or 'Veritas of the Waters'—founded the bloodline of the Water Priestesses.

For a long time the sealing crystals would remain an source of conflict among the nations, who clashed for their control due to the power they contained. Two of the crystals, the Ice and Lightning Crystals, were destroyed long ago, while the six remaining ones were placed in shrines for protection. The wars ended and the countries entered a time of peace.

The Sworn Eight (functionally immortal due to Aldore modifications) still had lingering feelings of revenge against Aldore, yet were unable to return to Paladia. It wasn't until 100 years ago that Sakura and her sister Citra, or 'Veritas of the Light', learned that the dimensional gate they been banished through had never really disappeared. Most of the Veritas agreed to destroy the sealing crystals, except for Sakura and Raegen. They forsook their armors and left the group, refusing to further shed innocent blood. The remaining five Veritas (plus a new Veritas of the Dark) thus began to prepare for their revenge.

A hundred years later they put their plans into motion. They are opposed by Raegen's sons Rain and Lasswell, Fina, and their friends. The Sworn Six manage to destroy most crystals, however. When only the Dark Crystal remains, Rain's party is about to convince Lightlord to forsake revenge when the sages Sol and Behemoth K (freed by the destruction of the Water and Light Crystals) destroy the last crystal. The land begins to lose stability and a crystal tower appears, drawn towards the gate. The sage Dark Fina thus sacrifices herself and becomes the new Earth Crystal to stabilize the seal on Lapis. Meanwhile the party defeats the Chaotic Darkness summoned by Sol, and Raegen and Rain use the power of their bloodline to close the gate as best as they can. Rain goes missing after preventing Sol from forcing the gate open, but Lapis is now safe.

Lapis is made up of eight continents:

Due to events in the story, a crystal tower called the Land of the Crystals, and later the Wandering Lands atop it, appear and must be traversed by Rain's party in order to save Lapis from imminent destruction. Likewise, the Realm of the Dragon King appears due to Bahamut's power.

"To the Horizon" is the theme that plays on the world map. It is the second track on disc one of the soundtrack. 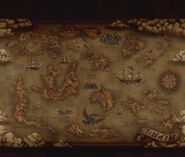 Lapis is the Latin word for "stone".

[view · edit · purge]Lapis lazuli, sometimes abbreviated to lapis, is a deep blue semi-precious stone that has been prized since antiquity for its intense color. It is the birthstone for December.