Cid Pollendina: Oh, shut up and help me remodel the Lanzelt Ruins page!
Please expand this article into a full one. The following tasks need to be completed:This request can be discussed on the associated discussion page. Remove this notice upon completion.

Lanzelt Ruins is a location in Final Fantasy Brave Exvius. It is the northernmost settlement in the isle of Lanzelt, above a gulf. The ruins aren't easily accessible by land as travelers must first pass through the Lanzelt mountain range. The sacred vessel of Paladia can be found there.

Although currently in ruined state, it was built ages ago by 'the ancients' whose civilization has long perished and who left machines that would attack any intruder. Modern scholars cannot explain its many secrets.

About twenty years ago the knight Raegen acquired the Sacred Ring of Paladia from a rampaging ochu in Latius Woods. He presumably was the one who hid the vessel at the Lanzelt Ruins once he no longer needed it.

Veritas of the Dark arrives at the ruins in his long search for the Scared Ring, and calls the ruins a cursed place. He enters a chambers which has a statue at the center and breaks the statue to find the relic, which glows red. He takes the vessel, as it is capable of tearing the barriers surrounding the crystals "like paper".

The party (Rain, Lasswell and Fina) arrives having pursued Darklord since the city of Grandport and find him at the innermost chamber. The trio manage to bring him to his knees, but he deems them unworthy to die by his hand and attacks with Seal of Conviction, ending the battle early. Darklord then claims that if Fina regains her memories she wouldn't be siding with those who protect the crystals, hinting that he knows about her original self. He then leaves. Despite the trio's defeat, they are undeterred and return to Grandport, where they are to set sail for Dirnado.

Deal light damage to an enemy

Veritas of the Boss

Party of 5 or less (Companion included) 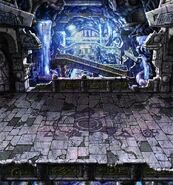